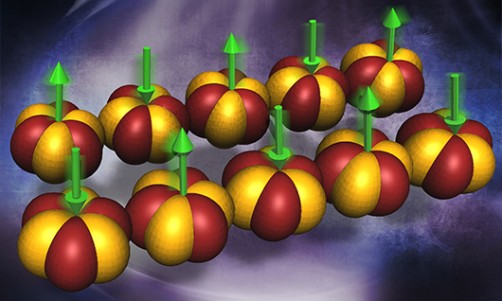 Cartoon showing the arrangement of ytterbium atoms in the crystalline compound made of ytterbium, platinum, and lead (Yb2Pt2Pb). The red and blue “pin cushions” denote the atomic orbitals associated with the large magnetic moments of ytterbium with the arrows showing the direction of the magnetic moments. Magnetic coupling (through electron hopping) occurs only where lobes of neighboring orbitals point towards one another and share the same color, a condition satisfied only along horizontal chains.

Today’s computers rely on the magnetic behavior of key compounds. New materials with unusual magnetic properties are vital for faster computers for science, security, and other technologies. Neutron scattering characterization revealed an unexpected magnetic behavior in a three-dimensional magnetic material made of ytterbium, platinum, and lead (Yb2Pt2Pb). The behavior is similar to that in a one-dimensional chain of magnetic moments. Scientists showed that this unusual phenomenon, seen for the first time in a three-dimensional material, arises due to hopping of electrons. The electrons hop between the orbitals of neighboring atoms (orbital exchange). The electrons create the one-dimensional magnetism.

The discovery provides yet another magnetic property that could be harnessed. These properties could aid in new approaches to high-performance computing and energy-efficient technologies.

An electron in an atom has three intrinsic properties: charge, spin and orbital angular momentum; the latter characterizes how the electron orbits around the nucleus. This can be understood by comparing electrons to the planets in our planetary system. Planets have their own angular momentum based on their fixed orbits around the sun. When electrons in a solid are constrained, like the planets, to only move along one direction, their properties, such as charge and spin can separate and behave as independent entities. The properties can be exploited for various applications. For example, the electron’s charge has been used in all semiconductor-based electronics, and its spin has been controlled and manipulated for spintronics applications. What has not been demonstrated until now is the separation of charge and orbital degrees of freedom, and this study completes the triad of what is called fractionation of the three properties of electrons. A team led by researchers at Stony Brook University and Brookhaven National Laboratory discovered unexpected magnetic behavior in Yb2Pt2Pb from neutron scattering measurements on a single crystal at temperatures close to absolute zero (nearly -460 °F). The scientists expected to find a spectrum (intensity of scattered neutrons as a function of energy and momentum resulting from their interactions with the material), showing sharply defined peaks or excitations. The peaks or excitations would correspond to the wave-like swinging motion of the large magnetic moments that result from the collective orbital angular momentum of several electrons per atom. The researchers were puzzled to discover a continuum of excitations with the precise form theoretically predicted for a one-dimensional chain of magnetic moments corresponding to the spin of a single electron. An explanation for this conundrum came from considering what happens when electrons hop between atomic orbitals in neighboring ytterbium (Yb) ions. Based on the quantum mechanical selection rules, Yb atoms can only make low-energy electron exchanges with neighbors along one direction. Because of a strong coupling between the electronic spins and the atomic orbitals, the electron exchange causes the large magnetic moments on neighboring sites to flip their orientations. The discovery of the orbital exchange in magnetic materials offers yet another route to harness magnetism for applications in information and energy technologies.