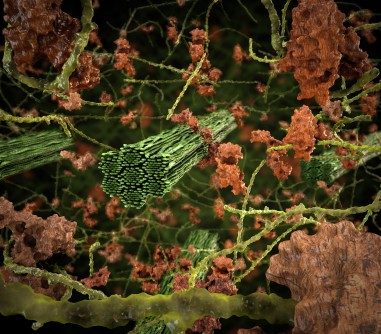 ORNL’s Jeremy Smith is studying the recalcitrance of biomass to enable cheaper, more efficient biofuels and other high-value chemicals.

Newswise — Seven researchers from the Department of Energy’s Oak Ridge National Laboratory have been chosen by the Innovative and Novel Computational Impact on Theory and Experiment, also known as INCITE, program to lead scientific investigations that require the nation’s most powerful computers.

INCITE awards computing time via a proposal process to researchers seeking to harness the power of DOE computing systems at the Argonne and Oak Ridge Leadership Computing Facilities to solve some of the world’s greatest scientific challenges.

Since INCITE’s inception in 2004, the ALCF and OLCF have continuously undergone significant upgrades to retain their edge in facilitating the most computationally demanding scientific projects. The ALCF’s most recent machine is Theta, an 11.69-petaflop Cray XC40 system whose 280,000-plus cores make it ideal for research at the nexus of simulation, data science, and machine learning. An even more powerful system, the exascale Aurora, is planned for deployment in 2021 and is projected to be capable of a quintillion (one billion billion) calculations per second.

The OLCF, meanwhile, boasts the 27-petaflop Titan supercomputer, a Cray XK7 hybrid system powered by both CPUs and GPUs across nearly 19,000 nodes. Most importantly, beginning in January 2019, OLCF’s new 200-petaflop supercomputer, Summit, an IBM AC922 machine, will be available to users for the first time during this INCITE allocation cycle.

The ORNL-based projects span a broad range of the scientific spectrum and represent the potential of high-performance computing in ensuring America’s scientific competitiveness and energy security.

“Not only is ORNL home to world-class supercomputers, but we are also home to some of the world’s best researchers in computing and domain sciences,” said Jeff Nichols, ORNL’s associate laboratory director for computing and computational sciences. “These awards are both a critical resource for researchers tackling some of the nation’s most complex energy challenges and a testament to the laboratory’s expertise across the scientific spectrum.”

The ORNL awardees are:

“This year’s INCITE selections represent the cutting edge in computational science,” said Judy Hill, INCITE Program Manager and group leader for the Scientific Computing Group at ORNL’s National Center for Computational Sciences. “Only the most advanced computers in the world are capable of accommodating the complexity necessary to solve these critical scientific challenges.”

ORNL is managed by UT-Battelle for the Department of Energy's Office of Science, the single largest supporter of basic research in the physical sciences in the United States. DOE’s Office of Science is working to address some of the most pressing challenges of our time. For more information, please visit https://science.energy.gov/.