Researchers perform first spectroscopic measurements on antihydrogen in pursuit of one of our biggest scientific mysteries: why is there so little antimatter in the universe? 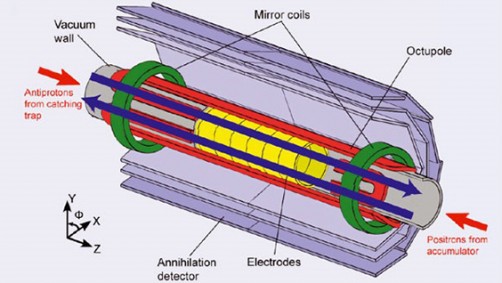 Scientists performed the first measurement of the spectrum of an antimatter atom by zapping the antihydrogen atoms by lasers (not shown in the figure) in the central Antihydrogen Laser Physics Apparatus (ALPHA). ALPHA includes octupole and mirror magnet coils (wrapped around the vacuum wall), the annihilation detector, and Penning trap electrodes.

The laws of physics predict equal amounts of matter and antimatter in the primordial universe. However, our present universe consists almost entirely of matter. For scientists, this begs a question. Is there a slight asymmetry in the laws that govern matter and antimatter? Enabled by plasma physics research, scientists are studying this question by examining antihydrogen atoms—the antimatter equivalent of hydrogen. The team greatly improved the trapping rate of antihydrogen atoms and made the first measurements of antihydrogen spectrum, the characteristic color with which antihydrogen glows.

The challenges related to probing antihydrogen with laser light are extreme. Why? Antihydrogen does not occur naturally. Scientists must synthesize antihydrogen and judiciously protect it from interaction with atoms of regular matter—with which it will annihilate. In a major technological advance, scientists have developed new ways probe antimatter with laser light.

The big bang should have yielded equal amounts of matter and antimatter, yet observations suggest that there is very little antimatter in the universe. This conundrum, which is one of the most significant outstanding problems in the theory of the early universe, is called the baryogenesis problem. Physicists have explored many possibilities to account for this matter-antimatter imbalance, but without generally agreed upon success. A difference between the spectra of hydrogen and antihydrogen would require a violation of the deep symmetry principle (charge-parity-time invariance, or CPT). Such a violation might lead to a solution of the baryogenesis problem. To this end, the international ALPHA team at the European Organization for Nuclear Research (CERN) trapped nearly 500 antihydrogen atoms, illuminated these antiatoms with near 243 nm laser light, and searched for light-antiatom interactions that would lead to the detrapping or ionization. The resulting detrapped or ionized antiatoms can be detected readily. The antiatoms provide a signal when the illuminating light is of the correct wavelength. By using two different wavelengths, the physicists established that the antiatoms were interacting with the light at nearly the same wavelength as is found for normal-matter hydrogen, and point the way to obtaining a complete spectrum of antihydrogen.