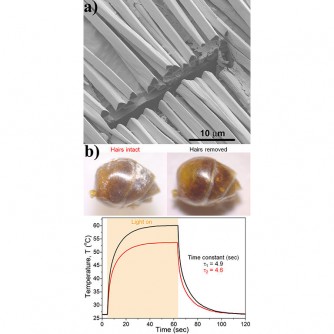 a) Scanning electron microscopy image of the hair coating of Saharan silver ants, which shows the triangular cross section of the hairs. The cross section was produced using focused ion beam milling. The uniquely shaped hair coating strongly reflects sunlight and efficiently dissipates heat through thermal radiation. b) Upper images: Photographs of the abdomen of a silver ant before and after hair removal. Lower image: A graph of the transient temperature of the specimens as a function of time. The data show that the specimen with intact hair coating can maintain a reduced steady-state temperature when exposed to the solar spectrum. The specimen with intact hairs also possesses a smaller time constant for temperature change, which indicates a larger rate of thermal radiation (a larger rate of cooling) due to the presence of the hair coating.

Saharan silver ants can maintain stable, viable body temperatures even while traversing the searing (~150°F) sands of the Sahara desert. By analyzing the geometry, topology, and optical properties of triangular hairs that cover an ant’s body, a team of scientists has discovered how ant hairs help these animals regulate their body temperature. Optical and thermodynamics experiments revealed how reflection of the visible and near-infrared spectrum and re-radiation of the mid-infrared spectrum effectively cooled the ants even under full daylight conditions.

The specific mechanism that silver ants use to regulate their body temperature under extreme heat conditions—controlling the reflection and emission of light from their bodies—could be used in technologies to cool buildings and vehicles. Specifically, exploiting the geometry and architecture that the ant hair possesses in human-made coatings, fabrics, and textures could lead to significant improvements in passive radiative cooling technology.

Saharan silver ants (Cataglyphis bombycina) forage in the Saharan desert in the full midday sun when surface temperatures reach up to 70°C (158°F), and they must keep their body temperature below their critical thermal maximum of 53.6°C (128.48°F) most of the time. In their wide-ranging foraging journeys, the ants search for corpses of insects and other arthropods that have succumbed to the thermally harsh desert conditions, which they are able to endure more successfully.

The researchers found that the ants are covered with a dense array of uniquely shaped hairs on the top and sides of their bodies, which keep them cool in two ways. These hairs are highly reflective under the visible and near-infrared light, i.e., in the region of maximal solar radiation. The hairs are also highly emissive in the mid-infrared portion of the electromagnetic spectrum, where they serve as an antireflection layer that enhances the ants’ ability to offload excess heat via thermal radiation, which is emitted from the hot body of the ants to thecooler surroundings above. This passive cooling effect works under the full sun whenever the insects are exposed to the clear sky. A third effect helps the ants maintain proper body temperature. The ants’ bare bottom surface reflects mid-infrared radiation from the hot desert floor more efficiently than if that region were covered by the same hairs on the top and sides of their bodies. Thus, the combined presence and absence of hair across their bodies effectively regulates the ants’ temperature in the harsh desert environment.

This research was supported by the National Science Foundation under the Electronics, Photonics, and Magnetic Devices program (ECCS-1307948) and Physics of Living Systems program (PHY-1411445), and the Air Force Office of Scientific Research (AFOSR) Multidisciplinary Research Program of the University Research Initiative (MURI) program (FA9550-14-1-0389). Research was carried out in part at the Center for Functional Nanomaterials, Brookhaven National Laboratory under contract No. DE-SC0012704.