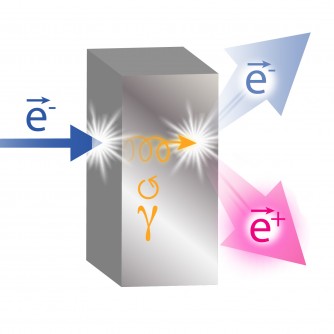 The Polarized Electrons for Polarized Positrons (PEPPo) experiment in Jefferson Lab’s CEBAF injector demonstrated a new technique for production of polarized positrons. When an energetic electron beam strikes matter, it produces photons that can further convert their energy in pairs of an electron and a positron. If the electron beam is polarized, the polarization can be passed on to the new electrons and positrons.

Newswise — Researchers use accelerators to coax the electron into performing a wide range of tricks to enable medical tests and treatments, improve product manufacturing, and power breakthrough scientific research. Now, they’re learning how to coax the same tricks out of the electron’s antimatter twin – the positron – to open up a whole new vista of research and applications.

Using the Continuous Electron Beam Accelerator Facility (CEBAF) at the Department of Energy's Jefferson Lab, a team of researchers has, for the first time, demonstrated a new technique for producing polarized positrons. The method could enable new research in advanced materials and offers a new avenue for producing polarized positron beams for a proposed International Linear Collider and an envisioned Electron-Ion Collider. Jefferson Lab Injector Scientist Joe Grames says the idea for the method grew out of the many advances that have been made in understanding and controlling the electron beams used for research in CEBAF.

“We have a lot of experience here at Jefferson Lab in operating a world-leading electron accelerator,” Grames said. “We are constantly improving the electron beam for the experiments, pushing the limits of what we can get the electrons to do.”

The CEBAF accelerator gathers up free electrons, sets the electrons to spinning like tops, packs them full of additional energy (“accelerating” the particles to up to 12 billion electron-volts), and directs them along a tightly controlled path into experimental targets. Grames and his colleagues would like to take that finesse a step further and transform CEBAF’s well-controlled polarized electron beams into well-controlled beams of polarized positrons to offer researchers at Jefferson Lab an additional probe of nuclear matter. They named the endeavor the Polarized Electrons for Polarized Positrons experiment, or PEPPo.

Positrons are the anti-particles of electrons. Where the electron has a negative charge, the positron has a positive one. Producing positrons that are spinning in the same direction, like the electrons in CEBAF, is very challenging. Before PEPPo, researchers had successfully managed to coax polarized positrons into existence using very high-energy electron beams and sophisticated technologies. The PEPPo method, however, puts a new twist on things.

“From the beginning, our aim was to show that we could use the polarized electron beam we produce every day at CEBAF to create the positrons. But we wanted to do that using a low-energy and small-footprint electron beam, so that a university or company may also benefit from our proof of principle,” Grames explained.

The PEPPo system was placed inside the CEBAF accelerator’s injector, which is the part of the accelerator that generates electrons. The system consists mainly of small magnets for managing the particle beams, targets for transforming them, and detectors for measuring the particles.

In it, a new beam of electrons from CEBAF is directed into a slice of tungsten. The electrons rapidly decelerate as they pass through the tungsten atoms, giving off gamma rays. These gamma rays then interact with other atoms in the tungsten target to produce lower-energy pairs of positrons and electrons. Throughout the process, the polarization of the original electron beam is passed along. The researchers use a magnet to siphon the positrons away from the other particles and direct them into a detector system that measures their energy and polarization.

“We showed that there’s a very efficient transfer of polarization from electrons to the positrons,” said Grames.

Further, the researchers found that it is also possible to dial up the degree of polarization that they are interested in by selecting positrons of the right energy. While the more abundant lower-energy positrons are less polarized, the positrons with highest-energy retain nearly all of the polarization of the original electron beam. In PEPPo, the electron beam was 85 percent polarized and accelerated to 8 million electron-volts (MeV).

“Nuclear physicists typically want the highest polarization possible for their experiments,” he explained. “Positrons collected at half the original electron energy were about 50 percent polarized, which is still quite high. But, as we approached the maximum energy, we measured 82 percent, showing that a very large portion of the original electron polarization is transferred.”

The PEPPo experiment ran for four weeks in the spring of 2012. The result has just been published in Physical Review Letters, and it is featured as an Editors’ Suggestion.Grames and his colleagues say now that they have their proof of principle, they want to design a source that is capable of producing a beam of polarized positrons for research.“With this result in hand, we are now asking ourselves what’s the best way to collect these positrons into a beam that may be used by nuclear physicists in experiments at Jefferson Lab and that may be useful for other facilities. That’s the next step.”This work was supported in part by the U.S. Department of Energy’s Office of Science, the French Centre National de la Recherche Scientifique, and the International Linear Collider project.

DOE’s Office of Science is the single largest supporter of basic research in the physical sciences in the United States, and is working to address some of the most pressing challenges of our time. For more information, visit science.energy.gov.