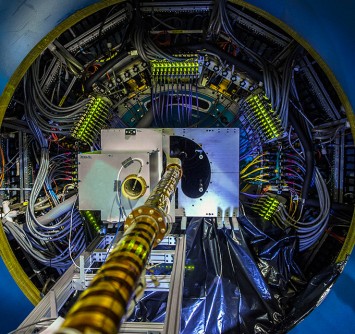 The Heavy Flavor Tracker being installed in the heart of the STAR detector at the Relativistic Heavy Ion Collider at Brookhaven National Laboratory.

Newswise — Thousands of times a second the Relativistic Heavy Ion Collider (RHIC), a particle collider at Brookhaven National Laboratory, creates a quark-gluon plasma—a recreation of the hot quark soup that existed at the dawn of the universe. Particles composed of heavy quarks—which go by whimsical names such as “charm” and “beauty”—can help reveal subtle details about the quark-gluon plasma, and by extension, the early universe and the origins of matter.

Nuclear physicists conducting research at RHIC now have the ability to detect these rare, elusive particles using the Heavy Flavor Tracker (HFT), a new component recently installed as part of the STAR experiment. This device will help to precisely measure the plasma’s properties, including its ability to flow like a nearly perfect liquid, and can offer insight into how certain particles lose energy as they traverse the plasma.

Particles composed of quarks that are heavier than the “up” and “down” quarks that make up ordinary atomic nuclei can help reveal subtle details about a primordial soup made of matter’s building blocks—known as a quark-gluon plasma. This hot quark soup, which existed at the dawn of the universe, is recreated thousands of times a second when ordinary nuclei are smashed together in energetic collisions at the Relativistic Heavy Ion Collider (RHIC), a particle collider at Brookhaven National Laboratory. But the particles containing heavy quarks—which go by whimsical names such as “charm” and “beauty”—are produced only rarely and disappear in an instant. Nuclear physicists conducting research at RHIC now have the ability to detect these rare, elusive particles using the Heavy Flavor Tracker (HFT), a new component recently installed as part of the STAR experiment. This device will help to precisely measure the plasma’s properties, including its ability to flow like a nearly perfect liquid, and can offer insight into how certain particles lose energy as they traverse the plasma.

The STAR Heavy Flavor Tracker (HFT) will provide precise measurements of the production rates of particles containing different combinations of heavy quarks, some of which are heavier than others. Measuring how the heavy particles interact with the quark-gluon plasma will give physicists further insight into the plasma's ability to flow with extremely low viscosity, or resistance—almost like dropping variously sized pebbles into a stream to see how fast it is flowing. These measurements may also help explain the mechanism by which even high-momentum particles appear to lose energy to the plasma. The different abundances and masses of heavy quarks can help differentiate how matter interacts with quarks and provide insight into thermalization—how the matter created in RHIC’s collisions approaches thermal equilibrium. These measurements will lead to a better understanding of properties of the quark-gluon plasma and will stimulate new theoretical studies.

The energy deposited when RHIC collides gold ions at nearly the speed of light creates thousands of new particles, including some rare combinations of different types of heavy quarks. These heavy particles decay in the time it takes them to travel about 100 microns—about the width of a hair. The HFT, now inserted within the core of the STAR experiment, was designed to identify these fleeting heavy particles using a four-layer silicon detector. The first two layers are state-of-the-art pixel detectors (PXL) in which each layer uses silicon pixels with dimensions of 20 by 20 micrometers mounted on very light structures. The PXL detector is the first at a collider to use a new detector concept called Monolithic Active Pixel Sensors (MAPS). The MAPS sensors are thinned to 50 micrometers and have been placed very close to the beam line in which the particle collisions take place so they can track the elusive heavy particles immediately after they decay. The entire PXL detector can be retracted and if necessary replaced with a spare within a 24-hour period. Both the high resolution and the low mass of the detector represent a breakthrough in pixel technology. Two additional silicon-detector systems are used to increase the efficiency of the HFT. A single cylindrical layer of silicon pad detectors (IST) surrounds the PXL. The outermost detection layer consists of double-sided Silicon Strip Detectors (SSD).

The PXL detector was designed and built at Lawrence Berkeley National Laboratory (LBNL) using novel MAPS sensors that were developed at Institut Pluridisciplinaire Hubert CURIEN (IPHC, Strasbourg, France). The IST was designed and built at MIT, the University of Illinois at Chicago, and Indiana University; while the SSD readout electronics were built at LBNL and designed by a collaboration between LBNL and Subatech (Nantes, France). Overall detector integration was done by BNL and LBNL; and project management was provided by BNL with assistance from LBNL.

Installed at the STAR detector in time for the 2014 RHIC run, the HFT detector has so far recorded 1.2 billion gold-gold collision events, meeting all expectations in its performance to date. The STAR collaboration has begun analyzing this abundance of new data and looks forward to incorporating it into a deeper understanding of the quark-gluon plasma created at RHIC.