Stitching It All Together 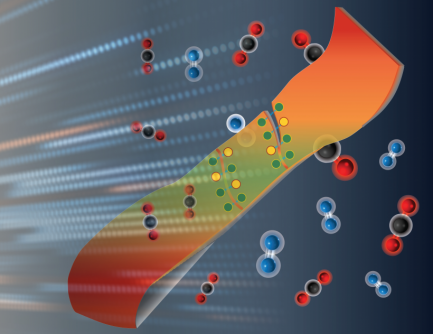 Rubbery segments in a ribbon-shaped polymer membrane make it super-stretchy. It also has the ability to heal itself after a cut or break.

Newswise — Imagine you’re an astronaut on a spacewalk. You’re doing your job when suddenly you get an alert: Your suit is leaking oxygen. Somewhere there’s a hole in your suit, a hole so tiny you can’t find it.

Some materials should not break because the results would be catastrophic. What if instead of breaking, these materials could toughen up at a weak spot? What if that hole in your astronaut suit could heal itself?

Biological systems handle this problem all the time. Sometimes fingers get calluses so they don’t get cut. Calluses form when repeated stress causes the skin to toughen. The tough skin provides resistance to breaking. But sometimes fingers get cut and the skin heals itself back together by forming a scab at the surface.

These concepts of how skin reacts provide inspiration for “tough” and “self-healing” materials. What biology does that synthetic materials don’t do is “sense” when the material is under stress or needs repair. In biological systems it’s almost automatic. Replicating this in non-living systems raises some difficult questions in the world of material science.

“How does the device know what to regrow and repair?” asks Rebecca Schulman of Johns Hopkins University. “Is it possible to avoid the self-healing problem altogether?” The latter question is the same thing skin asks: Do you need to form a callus or a scab?

The future of materials science covers a smorgasbord of applications: batteries that self-repair, wind turbines robust enough to withstand the extreme forces put on them, or long-lasting devices that only require replacing small parts every so often. Before getting to these applications, these basic science questions need to be answered. These questions are one reason the Department of Energy (DOE) supports research in this area at universities and national laboratories around the country.

“Materials are at the heart of helping us to manage our energy consumption and making things sustainable,” said Michael Strano of Massachusetts Institute of Technology (MIT), who leads a DOE effort at MIT on self-healing materials that utilize atmospheric carbon dioxide.

Preventing the need to completely replace materials is desirable not just from a cost-efficiency standpoint, but also from a sustainability standpoint. “As a science, we want to make better materials and better things,” said Tomonori Saito of the DOE's Oak Ridge National Laboratory (ORNL).

Better materials mean less waste and less need to replace broken and defunct items. The difficulty comes when trying to do synthetically what nature does without thinking. In general, there are two ways to tackle this problem: make materials tough so they don’t break, or make materials that heal themselves when they do break.

One approach is for the materials to react to a constant stressor in the environment. Let’s say you’re repeatedly tapping a window pane with a hammer. What if the glass “knows” to get stronger before it breaks? The same type of process could be applied to areas of flexible materials, like the knees of your jeans. As the repeated stress happens—like bending your knees when walking—the material would thicken around the joint and reinforce itself. This process starts by examining self-correcting and protective mechanisms found in the natural world.

“When biologists or biophysicists understand the molecular scale [of the system], we see that and think, ‘Oh this is cool. Can we design a synthetic system?’” said Zhibin Guan of the University of California, Irvine.

“In biology, many systems have a gradient connection from hard tissues to soft tissues. The interface from hard to soft is critical,” said Guan. Without the proper gradient interface between the different tissue types, large exterior forces could lead to a break at the connection. How a system adjusts and responds to an outside force produces this protective contact between hard and soft tissues.

Guan’s study was inspired by the tough outer skin of a polychaete worm. The jaw of the worm has a notably tough skin to it. The transition from the soft body of the worm to the tough outer skin intrigued Guan’s research group. The tough interface happens by increasing chemical bonding between proteins and metal ions in the worm’s jaw. Using selective bonding, the jaw toughens - making it able to withstand the force of a bite.

Guan studies this interface between hard and soft tissues to replicate it in synthetic materials. In the lab, they take polymers consisting of long, repeating chemical structures and introduce metal ions to simulate the composition of the worm’s jaw. If the material could sense the weakened area and chemically react to it, strengthening the spot of the weakness, the material wouldn’t break.

In the beginning, the weakened spot forms when micro-damage occurs. In both the worm’s jaw and synthetic materials, this damage happens at the molecular level. The stress causes small bonds to break between the metal ions and the proteins. These bonds, tenuous to begin with, sometimes reform.

The difficulty comes when trying to find the happy medium between tough enough not to break but not so tough that the material becomes inflexible. If the material continues to toughen as it experiences stress, eventually it will get to the point where it is completely rigid. Then it will be prone to failure for a different reason.

Ideally, tough materials would reverse this thickening process periodically to prevent that rigidity from becoming permanent. Understanding the chemistry behind the biological processes holds the key to signaling when a material could relax. By then, the threat of a catastrophic failure would have passed. The material could react again when another stressor affects the system.

However, as Schulman noted, there are several questions to answer before getting to that point. Getting a material to respond to stress is difficult even in a lab. While biological systems have methods in place to communicate damage, chemical signaling in synthetic systems is more difficult than in living systems. Living systems have whole organized structures dedicated to signaling. Synthetic materials often consist as one or only a few types of chemical units with no integrated way to trigger this toughening. So the second approach involves making materials that heal breaks when they happen.

A catastrophic failure doesn’t have to be big and dramatic to be cause serious problems. Take the space suit example. A tiny break in the suit material can be catastrophic for the astronaut; making the suit able to heal itself presents a possible solution.

What exactly makes a material self-healing? Like the way skin heals itself, these materials use chemical properties to “heal” themselves.

In synthetic materials, self-healing involves repair. The chemical bonds need to be able to reform, especially after catastrophic failures. Once damage causes the material to fail, it should be able to stitch itself back together just as a wound on skin does.

This kind of repair happens down at the molecular level. Saito’s research focuses on developing novel, self-healing polymers and aiming to understand this chemical response. Saito takes a sheet of a specially prepared polymer and tears it apart. At the chemical level, these polymers work to reform bonds and stitch themselves together. The key is understanding the chemical trigger telling them to stitch themselves together.

To use this synthetically, Schulman draws inspiration from cells. “Cells communicate about what needs to be in a particular location,” she said. “They use wireless signaling through chemicals.”

Translating this system-wide reaction into a synthetic material has been challenging. While in biological systems a whole network of signals reacts to breaks, a synthetic polymer is usually made of only a few components. How the material could communicate to the chemical components to stitch back together is a particularly difficult proposition. The material would have to detect damage or breakage and react accordingly.

Schulman noted that synthetic materials do not have the resilience of biological systems. When one piece fails, the whole system often fails. “Cells might live the lifetime of the organism, but the proteins turn over many times inside the cell,” she said.

While the materials science focusing on self-healing zooms into that extreme chemical level, the bigger picture shows the applications of self-healing materials and the way these things can change even fundamental ideas about how infrastructure works.

Strano likes to compare the possibilities of self-healing materials to the way a tree trunk grows. Trees breathe in carbon dioxide and nutrients from the soil and use these to build the trunk. By pulling their building materials from the air, they have constant access.

“The material can get stronger over time,” Strano said. When materials are surrounded by their building materials, there may be no limit to how long they can last.