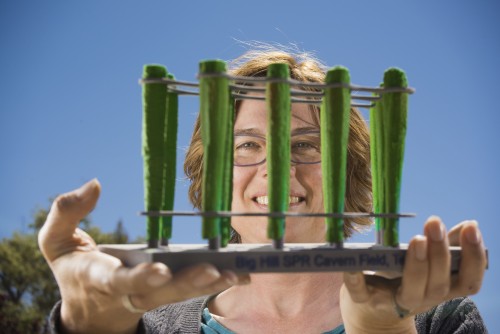 Sandia National Laboratories researcher Anna Lord displays a model of the Big Hill cavern field in Texas, part of the nation’s Strategic Petroleum Reserve. Sandia is the geotechnical adviser for the reserve.

Newswise — ALBUQUERQUE, N.M. — Not all salt is created equal, so when the nation stockpiles oil in salt caverns, it’s important to know all about the salt itself, as well as the shape of the storage caverns.

Decades of Sandia National Laboratories expertise on how salt domes behave went into a recent report that concluded that the U.S. Department of Energy is justified in extending the life of the Strategic Petroleum Reserve.

The report, “Long-Term Strategic Review of the U.S. Strategic Petroleum Reserve,” analyzed the reserve’s capability to be tapped, or drawn down, and how that figures into future storage decisions. Sandia estimated the number of potential drawdowns per cavern, using computer models that consider such factors as cavern shape, relationship to surrounding caverns and salt movement, or creep, and how such parameters ultimately affect a cavern’s stability.

Calculating the number of drawdowns left was particularly important, said geologist Anna Lord, Sandia’s project manager for the reserve. The number of times each cavern can still be tapped into affects overall design storage capacity decisions, including whether new caverns would be needed, she said.

The Strategic Petroleum Reserve was established after the 1973 oil embargo to protect the United States from severe oil supply interruptions and to meet its obligations under the International Energy Program.

DOE brought in Sandia five years later. The labs became geotechnical adviser in 1980, responsible for characterizing the site, including cavern and well development, geomechanical analysis, the integrity of caverns and wells, subsidence and monitoring.

The reserve operates four major storage facilities in the underground salt domes of the Gulf Coast, two in Louisiana and two in Texas. The stockpile of government-owned crude oil can be tapped at the president’s order when an emergency disrupts commercial oil supplies.

“When the president calls up and says, ‘We need to release X amount of oil,’ they need to be ready to do that at a certain rate and a certain amount a day,” Lord said. “All the work we do goes toward making sure they’re able to do that.”

Sandia’s work falls into two areas: geotechnical, which involves updating geologic understanding of the salt domes, modeling the caverns’ geomechanical behavior and assuring the integrity of caverns and wells drilled into them; and engineering, which includes understanding fluid behavior, analyzing the leaching process that occurs during oil removal and assuring the reserve meets environmental, safety and oil quality requirements.

Studying well integrity is one of Sandia’s most important responsibilities, Lord said. Think of wells as a series of casings inside each other like concentric circles, with each smaller well deeper than the larger one above. The column of casing, called a string, acts as a protective barrier — if one concentric circle goes, others remain.

Well failure could cause oil to leak into the environment. In addition, a well that loses integrity can’t be used to pull oil out.

Sandia’s team analyzes well integrity through hydrostatic column computer modeling. Reserve operators send nitrogen gas down the wells to test whether they’re losing pressure, and the Sandia models provide rates and locations of any nitrogen leaks. A nitrogen leak does not necessarily mean the well will leak oil, so the model differentiates between pressure changes caused by nitrogen flow versus oil flow. Pressure tests can indicate “when do we worry, when do we need to do remediation?” Lord said.

“There are well integrity issues everywhere, not just at the reserve. This happens anywhere with aging infrastructure. Geology takes over; engineering doesn’t matter.”

Oil is removed by injecting fresh water into the brine stored at the bottom of the caverns, pushing out oil floating above the brine. But fresh water dissolves salt, changing the caverns’ shape.

Each cavern was meant to be emptied five times. But emptying a cavern makes it larger because the fresh water dissolves some of the salt. Sandia’s geomechanical modeling shows, for example, “oh, you really only have three drawdowns in this cavern, you have a full five in this one, but you have none in this one, and if you take all the oil out of this one you cannot use that cavern again,” Lord said.

Making sure caverns are optimal shape

When the reserve started, the government wanted to store oil as quickly as possible, and bought caverns the petrochemical industry had used. The reserve still uses some of those, but most oil today is stored in caverns the Energy Department created with Sandia’s feedback.

“Different domes behave differently,” Lord explained. “Maybe they have higher creep rates than other domes. It depends on how homogeneous it is. Is it pure salt or is it salt with shale or other impurities mixed in, such as anhydrite?”

The reserve’s managers can’t create a cavern simply by pumping in fresh water — the configuration of injection wells helps create the desired shape. Sandia researchers determine salt properties in an area by analyzing impurities and doing stress and strain testing, and model different leaching well configurations. From the model, they can determine how the leaching will affect the cavern’s shape. They know from past studies what a cavern should look like for continued integrity.

Sandia also makes recommendations for cavern operations based on their size and shape. Salt creeping to close voids causes stresses and strains on caverns and wells. Sandia’s geomechanical modeling predicts where those might occur and whether they’ll create a problem.

The team stepped up well and cavern integrity modeling in the past couple of years, collecting and analyzing existing data to see what’s going on and how one cavern’s operation affects a neighboring cavern. “We’re trying to bring all the pictures together into one holistic story,” Lord said.