Sticky molecules hop aboard oily floaters and may influence the amount of sunlight reflected by marine clouds. 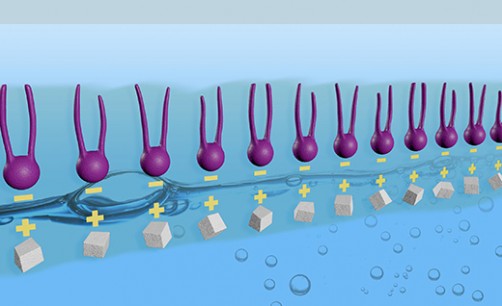 Scientists are learning more about the chemical interaction mechanisms that may be responsible for the high amount of sugar-like material found in sea spray. Sea spray is produced from ocean bubbles that burst and launch the tiny sugar-like particle hitchhikers into the atmosphere. In this image, the cubes are positively charged saccharides (sugar-like molecules) and the purple structures are negatively charged fatty acids (oily molecules) floating on the surface of water (the ocean). The saccharides adsorb (stick) to the bottom of a layer of fatty acids that coat the water surface.

Like travelers who catch a ride to their next destination after arriving at an airport, sugar molecules (saccharides) floating near the ocean's surface catch a ride that takes them into the atmosphere. Saccharides are normally soluble in water, so they shouldn’t be able to exit the ocean and enter the atmosphere. Yet, they are part of sea-spray particles that are tossed into the atmosphere by breaking waves, eventually helping to seed low-lying marine clouds. Researchers have now found that a “sticky” strategy binds these saccharides to fatty molecules floating on the ocean’s surface, shielding the saccharides from their soluble nature. The saccharides are then flung into the atmosphere when bubbles of sea spray burst. This mechanism appears to explain the discrepancies between models that underpredict the organic content of sea spray and actual measurements of the composition of sea spray aerosols.

Scientists are interested in the composition of particles tossed into the atmosphere by sea spray, a large source of water vapor that helps to form clouds. Researchers who analyze sea spray samples collected onboard ships found that they contain a large amount of saccharides (sugar-like molecules). Because saccharides easily dissolve in water, however, researchers were unclear as to how these molecules could survive to enter the spray. In a recent study, scientists from Pacific Northwest National Laboratory (PNNL), Environmental Molecular Sciences Laboratory (EMSL), Montana State University, and Los Alamos National Laboratory (LANL) discovered the mechanism by which these molecules are incorporated into sea spray. The team conducted spectroscopy experiments at EMSL, a U.S. Department of Energy Office of Science user facility. The experiments showed that saccharides could adsorb to the bottom of a layer of fatty acids that coat the water surface. This adsorption causes an increased amount of saccharide molecules to be present at the surface. When the layer of fatty acids was not present, the saccharide molecules dissolved in the water. Because sea spray aerosol forms from the surface layer of ocean water, this finding suggested that similar mechanisms could increase the amount of organic matter emitted in sea spray. The team also found that this “sticky” strategy not only shields these molecules from their soluble nature, it explains the discrepancies between models that predict sea spray’s organic enrichment and actual measurements of sea spray aerosol composition.

Using a model developed at PNNL and LANL, the researchers tested the sensitivity of modeled sea spray composition to this mechanism. They found that if the molecules adsorb strongly enough, the amount of organic matter emitted in sea spray could be substantially increased. These organic matter emissions could potentially impact the amount of sunlight reflected by sea-spray seeded clouds, which has a cooling effect on Earth’s climate.