Summer in the Arctic 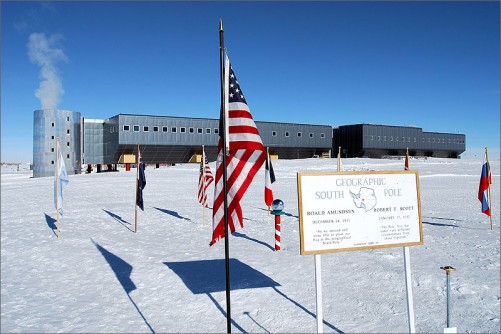 NREL researchers are experimenting with adding wind and photovoltaic solar energy systems at the Amundsen-Scott Research Station at the South Pole. The new station originally was supposed to include renewable energy systems, but contruction delays and other factors cut them from the project.

Newswise — Did you know that one of the best places to study global warming is actually in one of the coldest climates on the planet? It's true! Climate change and a warming world have far reaching implications for our world and the people who inhabit it. It turns out that some of the most remote parts of the globe are experiencing the most rapid changes in climate with important impacts for the entire Earth.

So with summer time coming up for us in the Northern hemisphere, it is a good time to discuss the season in the Arctic, since not all of us "down south" know about it. The Arctic is warming, ice is melting and scientists are busy trying to understand this remote component of the Earth system and how it is responding, and will respond, to a changing climate.

Multiple program offices in the Department of Energy – Office of Science conduct research helping us to learn about climate change.

Among them is the Terrestrial Ecosystem Science Program, which sponsors a Next-Generation Ecosystems ExperimentsExternal link (NGEE) in the Arctic to help us to better understand how and why climate is changing in the great white north. Scientists believe that addressing this challenge is required to improve predictions of not only the Arctic climate but also the global climate.

NGEE – Arctic seeks to address this challenge by understanding and modeling the physical, chemical, and biological behavior of terrestrial ecosystems in Alaska with an emphasis on characterizing carbon fluxes into and out of perennially frozen soil known as permafrost. Permafrost is by definition soils that are frozen continuously for at least two years (and much longer in many cases). As a result of having been continuously frozen, permafrost soils have accumulated ice and plant material over time and currently contain enormous quantities of this carbon-rich organic material. Our emerging concern is that for the first time in millennia, northern permafrost is thawing and exposing formerly frozen organic material to decay processes which generate greenhouse gases that can be emitted to the atmosphere. NGEE-Arctic is working to understand and model the interactions between permafrost and greenhouse gases, like carbon dioxide and methane under changing climate conditions. Understanding the relationship between permafrost thaw and greenhouse gas emissions is critically important; and the current generation of climate models do not yet have these processes built into their model systems.

The goal of NGEE–Arctic is to reduce uncertainty in projections of future climate by developing and validating a model representation of permafrost ecosystems and incorporating that representation into Earth system models. The new modeling capabilities will improve our confidence in model projections and will enable scientist to better respond to questions about processes and interactions now and in the future. It also will allow them to better communicate important results concerning climate change to decision makers and the general public. And let's not forget about summer in the Antarctic, which happens during our winter months.

Closely related to NGEE, the Atmospheric Radiation MeasurementExternal link(ARM) Climate Research Facility collects atmospheric and climate data used by DOE and other government agencies. The ARM Facility has two observational sites collecting atmospheric information on the north slope of Alaska. During this summer, a team of ARM scientists will conduct an aerial campaign using the ARM Aerial Facility's Gulfstream-159 (G-1) research aircraft. The G-1 will make a series of flightsExternal link along the northern coast of Alaska measuring carbon dioxide, methane, and carbon monoxide trace gas concentrations, as well as aerosols, and cloud properties to find out why current climate models underestimate how rapidly the Arctic is getting warmer.

Beginning in October 2015, at the other end of the world, ARM will deploy a mobile facility to Antarctica, in a campaign called the ARM West Antarctic Radiation ExperimentExternal link (AWARE). While the majority of the mobile facility instrumentation will be installed at McMurdo Station, a subset of instrumentation will be deployed to West Antarctica to study the role of clouds on the surface energy balance in this region. West Antarctica is one of the more rapidly warming regions on Earth, and this warming is closely connected with warming oceans and global sea level rise. Despite its importance to global systems, there has been no substantial atmospheric science or climatological field work on West Antarctica since the 1950's. Not surprisingly, global climate model simulations are known to perform poorly over the Antarctic and Southern Ocean, and the marked scarcity of cloud information at Southern high latitudes has so far inhibited significant progress. The ARM mobile facility campaign will gather sophisticated data on atmospheric processes for the first time in this extremely remote but globally critical region. The resulting knowledge will help to improve our understanding of this region and its representation in climate models.

Together, NGEE and AWARE, research efforts on opposite ends of the planet, are helping us to gain valuable climate science research and an education about Earth's changing climate.

Understanding climate change in the Arctic and the Antarctic is important for all of us around the globe, because it is a global issue. The melting ice sheets in Antarctica and Greenland cause sea level rise over the entire planet. Increasing global temperatures will thaw permafrost, which will then decay with high probability of additional release of greenhouse gases that in turn can raise global temperatures. These interconnections emphasize the need to understand the entire Earth system and the roles of humans in that system in order to make projections how the Earth's future will evolve.

Ethan Alpern is a Communications Specialist in the Office of Science, [email protected]