Supercapacitors: WOODn’t That Be Nice 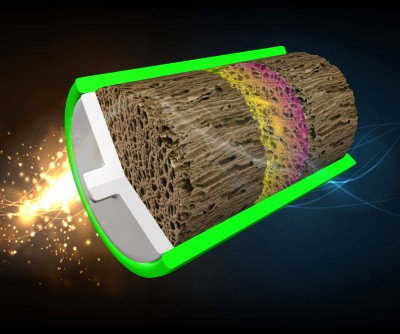 One of the biggest problems with supercapacitors is the environmental harm they pose upon disposal. Researchers at Nanostructures for Electrical Energy Storage developed an environmentally friendly version using wood. 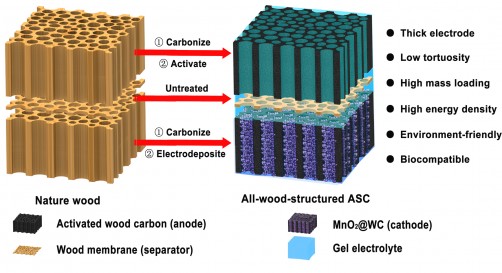 Reproduced by permission of The Royal Society of Chemistry

Reproduced by permission of The Royal Society of Chemistry

Newswise — Electrical energy storage plays an important role in modern society by powering portable devices, cell phones, and electric cars. This is generally accomplished through the use of batteries and supercapacitors.

Supercapacitors store energy by loosely holding charges (through changing the applied charge in the electrodes). These devices don’t store as much energy as batteries, but they take energy in and release it quickly, which allows for rapid charging and discharging. Supercapacitors are used in short-term applications with large power bursts such as the regenerative braking in hybrid cars.

Supercapacitors are composed of a positive electrode (cathode) and negative electrode (anode), and an electrolyte in between the electrodes “shuttles” ions back and forth during charging and discharging cycles. They often require a separator to act as an electronic charge-insulating layer, which prevents internal electrical shortages. The separator and electrolyte also allows charge to flow back and forth between the electrodes during recharging cycles.

While the separator may appear minor, it is vital in the speed and safety at which a device is charged. The faster and easier the charges move between the anode and cathode, the faster your device charges. But if the charges do not reach the correct final destination, a short occurs and your device malfunctions. In extreme cases, it catches fire.

Research into energy storage materials has come under intense focus, and efforts in structure design have increased. Nanostructures for Electrical Energy Storage (NEES) scientists have been working to solve charge transport and safety issues through the development of a wood supercapacitor. In a new proof-of-concept study, the built and tested just such a supercapacitor.

For the first time, scientists made a supercapacitor with all parts derived from a nature-made wood structure, namely basswood. The wood supercapacitor device is not only environmentally friendly, but also generates high energy storage and output with a superior number of charging cycles compared to most carbon- and metal oxide-based supercapacitors, even after 10,000 charge cycles.

The secret to this design is to take full advantage of nature by utilizing the existing low tortuosity channels. Tortuosity is the amount of twists and turns in the charge transport pathway. This is analogous to trying to roll a ball through a straight tube (wood supercapacitor) as compared to a corkscrewed tube (separator in traditional batteries).

Straight channels are clearly visible in the cross sections of the enhanced wood supercapacitor.

The straight channels allow for the charges to move easily from the anode through the electrolyte and separator to reach the cathode during use, and vice versa for charging. Imagine a mouse trying to safely reach a block of cheese on the other side of a maze. The chances of the mouse safely and quickly reaching the cheese are much greater if the maze was a straight line, rather than a twisting, turning path. This is similar to the journey to and from the anode and cathode that the ions/charges experience on every charge and discharge cycle. The wood supercapacitors provide the quick, safe straight channels, while traditional devices generally comprise the treacherous maze. This provides fast and safe charging as the charge has a clear, unencumbered pathway to travel between electrodes. The low tortuosity of the material is just one of the novel aspects of this technology. Additionally, the use of the same original basswood material for all device parts results in a device with a high degree of biodegradability.

Developing new structure design strategies to maximize electrical energy storage capacity touches every part of our lives. It is a continuous race for longer-lasting, more powerful, and environmentally friendly energy storage materials and designs. The wood supercapacitor described by recent research from NEES may just be what we are looking for in the innovative next-generation energy storage technologies.

This work was supported as part of the Nanostructures for Electrical Energy Storage, an Energy Frontier Research Center funded by the U.S. Department of Energy, Office of Science, Office of Basic Energy Sciences. The authors acknowledge the support of the Maryland NanoCenter, a user facility on the University of Maryland’s campus, and its AIM Lab.

This item, written by Ian McKendry, is part of Frontiers in Energy Research, a newsletter for the Energy Frontier Research Centers created by early career members of the centers. See http://www.energyfrontier.us/newsletter/ 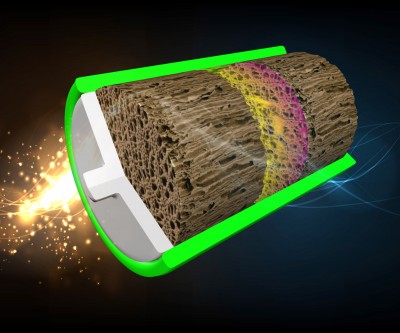 Caption: One of the biggest problems with supercapacitors is the environmental harm they pose upon disposal. Researchers at Nanostructures for Electrical Energy Storage developed an environmentally friendly version using wood. 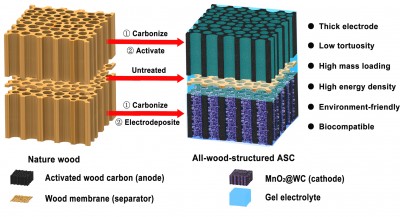 Credit: Reproduced by permission of The Royal Society of Chemistry

Credit: Reproduced by permission of The Royal Society of Chemistry