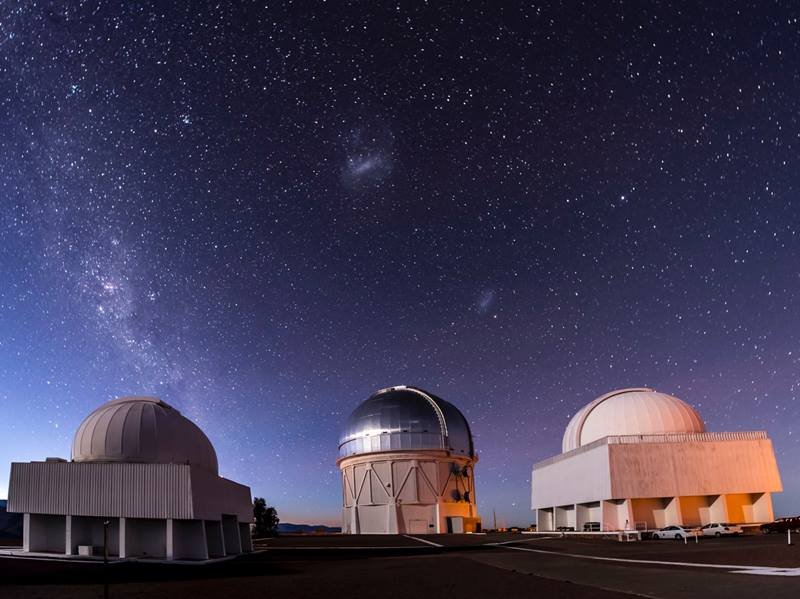 Researchers used the Blanco telescope in conducting the Dark Energy Survey. The Milky Way is on the left of the sky, with the Magellanic clouds in the center.

Why is our universe accelerating in its expansion? If Einstein’s theory of general relativity is correct, then the dark energy that drives this expansion accounts for nearly 70 percent of the total energy in the universe. However, precise measurements of the history of this expansion may reveal that new dynamic forces are in play. The Dark Energy Survey has combined its four primary cosmological probes for the first time in order to constrain the properties of dark energy. These first combined constraints are competitive with previous experiments and will improve as more data is analyzed.

The Dark Energy Survey is the first experiment to demonstrate the immense power and promise of this combined-probes approach to survey design. The combined-probes approach is the basis for all major next-generation dark energy experiments in the 2020s, including the Large Synoptic Survey Telescope (LSST). It enables scientists to make the most precise measurement of dark energy possible while protecting against measurement bias.

Dark energy is the mysterious phenomenon that is accelerating the universe’s expansion. To get a firmer grasp on dark energy’s nature, scientists take various measurements of celestial objects, analyzing the data to determine how dark energy affects the growth of our universe.

Researchers model dark energy with an equation of state. This is related to the rate at which the universe grows over time. That the rate is constant (with a value of -1) is the prediction of a cosmological constant in Einstein’s field equations in general relativity.

For the first time, the Dark Energy Survey has combined four approaches to inform the dark energy equation of state. The four approaches measure the distances to the explosions of dying stars called supernovae, the regular variations in the density of galaxies called baryon acoustic oscillations, the way galaxies cluster together, and the way light from distant galaxies is distorted (lensed) by structure in the universe. This combination is one of the most powerful measurements ever made by a dark energy experiment. This combined result agrees with the result obtained by combining many previous cosmological data sets: that the dark energy equation of state appears consistent with a cosmological constant. The Dark Energy Survey also demonstrates for the first time that researchers can use similar surveys to independently constrain the amount of ordinary matter in the universe, an important check against measurements from the primordial universe nearly 14 billion years ago.

Arguably, the most important aspect of this measurement is that it is the first time scientists have confirmed this result to such precision in an analysis that was protected against observer bias. This is important because the Dark Energy Survey is now making the most precise measurements of dark energy ever, and when the standard cosmological model and all previous evidence suggests a cosmological constant explanation for dark energy, researchers must do everything they can to limit the possibility of unconscious biases in their analyses.

This work is based in part on observations at Cerro Tololo Inter-American Observatory, National Optical Astronomy Observatory, which is operated by the Association of Universities for Research in Astronomy under a cooperative agreement with NSF.

The DES Data Management System is supported by the NSF. The DES participants from Spanish institutions are partially supported by MINECO grants, some of which include European Regional Development Funds from the European Union. Institute of High Energy Physics is partially funded by the Research Centers of Catalonia program of the Government of Catalonia. Research leading to these results has received funding from the European Research Council (ERC) under the European Union’s Seventh Framework Program including ERC grant agreements. Support was also provided by the Australian Research Council Centre of Excellence for All-sky Astrophysics and the Brazilian National Institute of Science and Technology e-Universe.