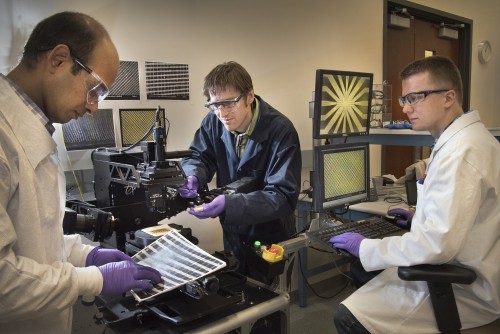 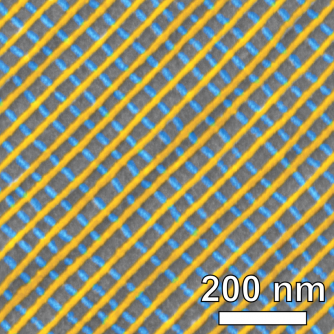 Scanning electron microscope image of a self-assembled platinum lattice, false-colored to show the two-layer structure. Each inner square of the nanoscale grid is just 34 nanometers on each side. 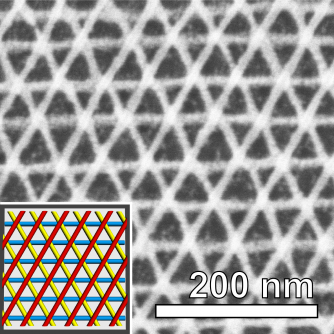 Scanning electron microscope image of a three-layer platinum mesh. The colored inset shows each distinct layer of the nanoscale grid. 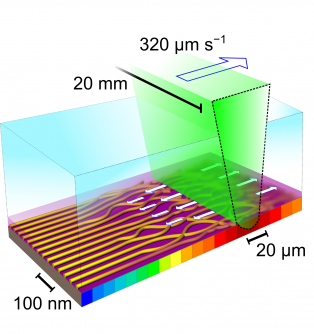 Illustration of the experiment showing the sweeping laser inducing intense heat that both accelerates polymer self-assembly and precisely aligns the nano-cylinders that form the foundation of the final grid.

Newswise — UPTON, NY—Down at the nanoscale, where objects span just billionths of a meter, the size and shape of a material can often have surprising and powerful electronic and optical effects. Building larger materials that retain subtle nanoscale features is an ongoing challenge that shapes countless emerging technologies.

“We can fabricate multi-layer grids composed of different materials in virtually any geometric configuration,” said study coauthor and Brookhaven Lab scientist Kevin Yager. “By quickly and independently controlling the nanoscale structure and the composition, we can tailor the performance of these materials. Crucially, the process can be easily adapted for large-scale applications.”

The new technique relies on polymer self-assembly, where molecules are designed to spontaneously assemble into desired structures. Self-assembly requires a burst of heat to make the molecules snap into the proper configurations. Here, an intensely hot laser swept across the sample to transform disordered polymer blocks into precise arrangements in just seconds.

For the first step in grid construction, the team took advantage of their recent invention of laser zone annealing (LZA) to produce the extremely localized thermal spikes needed to drive ultra-fast self-assembly.

To further exploit the power and precision of LZA, the researchers applied a heat-sensitive elastic coating on top of the unassembled polymer film. The sweeping laser’s heat causes the elastic layer to expand—like shrink-wrap in reverse—which pulls and aligns the rapidly forming nanoscale cylinders.

“The end result is that in less than one second, we can create highly aligned batches of nano-cylinders,” said study coauthor Charles Black, who leads the Electronic Nanomaterials group at CFN. “This order persists over macroscopic areas and would be difficult to achieve with any other method.”

To make these two-dimensional grids functional, the scientists converted the polymer base into other materials.

One method involved taking the nano-cylinder layer and dipping it into a solution containing metal salts. These molecules then glom onto the self-assembled polymer, converting it into a metallic mesh. A wide range of reactive or conductive metals can be used, including platinum, gold, and palladium.

They also used a technique called vapor deposition, where a vaporized material infiltrates the polymer nano-cylinders and transforms them into functional nano-wires.

The first completed nano-wire array acts as the foundation of the full lattice. Additional layers, each one following variations on that same process, are then stacked to produce customized, crisscrossing configurations—like chain-link fences 10,000 times thinner than a human hair.

“The direction of the laser sweeping across each unassembled layer determines the orientation of the nano-wire rows,” Yager said. “We shift that laser direction on each layer, and the way the rows intersect and overlap shapes the grid. We then apply the functional materials after each layer forms. It’s an exceptionally fast and simple way to produce such precise configurations.”

Study coauthor Atikur Rahman, a CFN postdoctoral researcher, added, “We can stack metals on insulators, too, embedding different functional properties and interactions within one lattice structure.

“The size and the composition of the mesh make a huge difference,” Rahman continued. “For example, a single layer of platinum nano-wires conducts electricity in only one direction, but a two-layer mesh conducts uniformly in all directions.”

LZA is precise and powerful enough to overcome interface interactions, allowing it to drive polymer self-assembly even on top of complex underlying layers. This versatility enables the use of a wide variety of materials in different nanoscale configurations.

“We can generate nearly any two-dimensional lattice shape, and thus have a lot of freedom in fabricating multi-component nanostructures,” Yager said. “It’s hard to anticipate all the technologies this rapid and versatile technique will allow.” 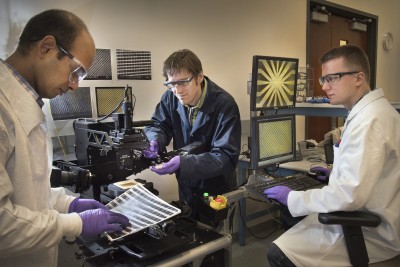 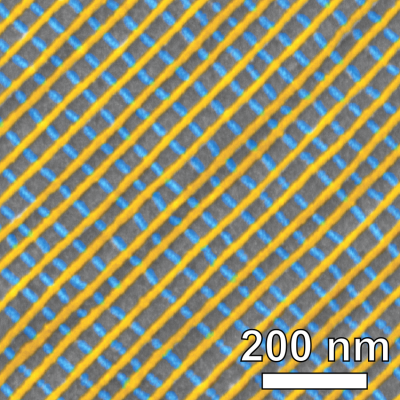 Caption: Scanning electron microscope image of a self-assembled platinum lattice, false-colored to show the two-layer structure. Each inner square of the nanoscale grid is just 34 nanometers on each side. 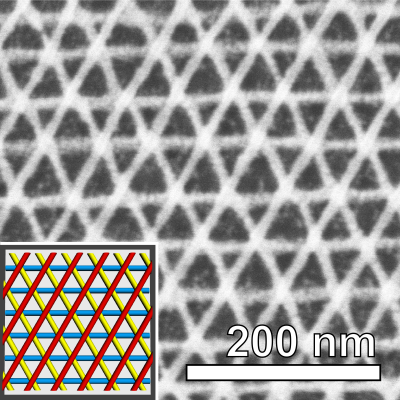 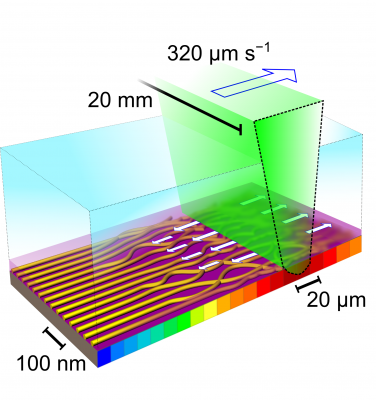 Caption: Illustration of the experiment showing the sweeping laser inducing intense heat that both accelerates polymer self-assembly and precisely aligns the nano-cylinders that form the foundation of the final grid.