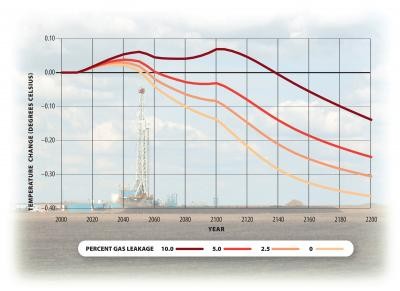 Newswise — BOULDER --Although the burning of natural gas emits far less carbon dioxide than coal, a new study concludes that a greater reliance on natural gas would fail to significantly slow down climate change.

The study by Tom Wigley, who is a senior research associate at the National Center for Atmospheric Research (NCAR), underscores the complex and sometimes conflicting ways in which fossil fuel burning affects Earth’s climate. While coal use causes warming through emission of heat-trapping carbon dioxide, it also releases comparatively large amounts of sulfates and other particles that, although detrimental to the environment, cool the planet by blocking incoming sunlight.

The situation is further complicated by uncertainty over the amount of methane that leaks from natural gas operations. Methane is an especially potent greenhouse gas.

Wigley’s computer simulations indicate that a worldwide, partial shift from coal to natural gas would slightly accelerate climate change through at least 2050, even if no methane leaked from natural gas operations, and through as late as 2140 if there were substantial leaks. After that, the greater reliance on natural gas would begin to slow down the increase in global average temperature, but only by a few tenths of a degree.

“Relying more on natural gas would reduce emissions of carbon dioxide, but it would do little to help solve the climate problem,” says Wigley, who is also an adjunct professor at the University of Adelaide in Australia. “It would be many decades before it would slow down global warming at all, and even then it would just be making a difference around the edges.”

The study will appear next month in the peer-reviewed journal Climatic Change Letters.

The burning of coal releases more carbon dioxide than other fossil fuels, as well as comparatively high levels of other pollutants, including sulfur dioxide, nitrogen oxides, and particles such as ash. Since natural gas emits lower levels of these pollutants, some energy experts have proposed greater reliance on that fuel source as a way to slow down global warming and reduce the impacts of energy use on the environment.

But the effects of natural gas on climate change have been difficult to calculate. Recent studies have come to conflicting conclusions about whether a shift to natural gas would significantly slow the rate of climate change, in part because of uncertainty about the extent of methane leaks.

Wigley’s new study attempts to take a more comprehensive look at the issue by incorporating the cooling effects of sulfur particles associated with coal burning and by analyzing the complex climatic influences of methane, which affects other atmospheric gases such as ozone and water vapor.

By running a series of computer simulations, Wigley found that a 50 percent reduction in coal and a corresponding increase in natural gas use would lead to a slight increase in worldwide warming for the next 40 years of about 0.1 degree Fahrenheit (less than 0.1 degree Celsius). The reliance on natural gas could then gradually reduce the rate of global warming, but temperatures would drop by only a small amount compared to the 5.4 degrees F (3 degrees C) of warming projected by 2100 under current energy trends.

If the rate of methane leaks from natural gas could be held to around 2 percent, for example, the study indicates that warming would be reduced by less than 0.2 degrees F (about 0.1 degree C) by 2100. The reduction in warming would be more pronounced in a hypothetical scenario of zero leaks, which would result in a reduction of warming by 2100 of about 0.2-0.3 degrees F (0.1-0.2 degrees C). But in a high leakage rate scenario of 10 percent, global warming would not be reduced until 2140.

“Whatever the methane leakage rate, you can’t get away from the additional warming that will occur initially because, by not burning coal, you’re not having the cooling effect of sulfates and other particles,” Wigley says. “This particle effect is a double-edged sword because reducing them is a good thing in terms of lessening air pollution and acid rain. But the paradox is when we clean up these particles, it slows down efforts to reduce global warming.”

In each of the leakage scenarios, the relative cooling impact of natural gas would continue beyond 2100, continuing to offset global warming by several tenths of a degree.

The study also found that methane leaks would need to be held to 2 percent or less in order for natural gas to have less of a climatic impact than coal due to the life cycle of methane. Both coal mining operations and the use of natural gas release varying amounts of methane, but the escaping gas’s influence on climate also depends on emissions of other gases, such as carbon monoxide and nitrous oxides, that affect the amount of time methane remains in the atmosphere.

To compare the impacts of natural gas and coal, Wigley drew on a number of studies that have evaluated emissions of sulfur dioxide and other pollutants from coal, as well as methane associated with the use of both fuels. Rather than try to assign a fixed percentage to methane leaks from natural gas operations, which can vary widely and are difficult to measure, Wigley analyzed the impacts of leakage rates from 0 to 10 percent—a broad range that encompasses existing estimates.

To project future energy demand, Wigley used a midrange estimate by the U.S. Climate Change Science Program that assumed no changes in government energy policies. He also assumed that sulfur dioxide emissions from coal would drop sharply over the next few decades due to pollution control devices.

Wigley then analyzed the impacts of a 50 percent reduction in coal burning by using a simplified computer climate model known as MAGICC (Model for the Assessment of Greenhouse-gas Induced Climate Change). The software, which Wigley helped develop, simulates changes in atmospheric levels of greenhouse gases and their influences on global climate.

For a downloadable graphic showing the impact of natural gas on climatehttps://www2.ucar.edu/news/5292/switching-coal-natural-gas-would-do-little-global-climate-study-indicates