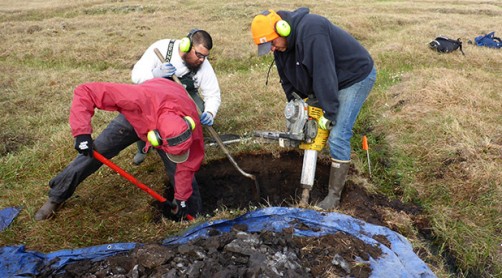 Opening a pit to observe and sample the soil profile of the rim and trough in a low-centered ice-wedge polygon on the Arctic Coastal Plain of Alaska.

Predicting how carbon in the soil changes when permafrost changes isn’t easy. Alaska’s diverse terrain makes it difficult to optimize the placement of data-gathering sites. Researchers used a geospatial approach that integrates observations with the climate, land cover (scrub, forest, etc.), geology and more. They determined that 484 new sites were needed to improve estimates of carbon stocks under different environmental conditions.

Permafrost-affected soils store one of the largest reservoirs of organic carbon on the planet. How environmental changes could affect this carbon, including releasing it to the air, are not well known. The magnitude, vulnerability, and spatial distribution of soil carbon stocks are major sources of uncertainty. The study offers locations to guide new field observations. The collected data will constrain uncertainties in soil carbon estimates. In addition, the sites will provide robust spatial benchmarks for studying the Earth.

Representing land surface spatial heterogeneity is a scientific challenge that is critical for designing observation schemes to reliably estimate soil properties. Led by researchers at Argonne National Laboratory, a team developed a geospatial approach to identify an optimum distribution of observation sites for improving the characterization of soil organic carbon stocks across Alaska. By using environmental data expected to influence soil formation as proxies for representing the spatial distribution of soil organic carbon stocks, the scientists determined that 484 new observation sites would be needed to complement data from existing samples. The added sites would let researchers characterize the average whole-profile soil organic carbon stocks across Alaska at a confidence interval of 5 kg C m-2. However, to estimate only a subsection of the whole profile at 0 m – 1 m and 0 m – 2 m, achieving the same confidence would require 309 and 446 new observational sites, respectively. New observation needs are greater for scrub (mostly tundra) than forestland cover types, and ecoregions in southwestern Alaska are among the most under-sampled. The number and locations of required observations are not greatly altered by changes in climatic variables through 2100, as projected by Intergovernmental Panel on Climate Change emission scenarios. Study results serve as a guide for future sampling efforts to reduce existing uncertainty in soil organic carbon observations and improve benchmarks for Earth system model results.

This study was supported by the U.S. Department of Energy, Office of Science, Office of Biological and Environmental Research, Climate and Environmental Sciences Division, Terrestrial Ecosystem Science program under contract DE-AC02-06CH11357 to Argonne National Laboratory.