The Magic Is Gone for Neutron Number 32 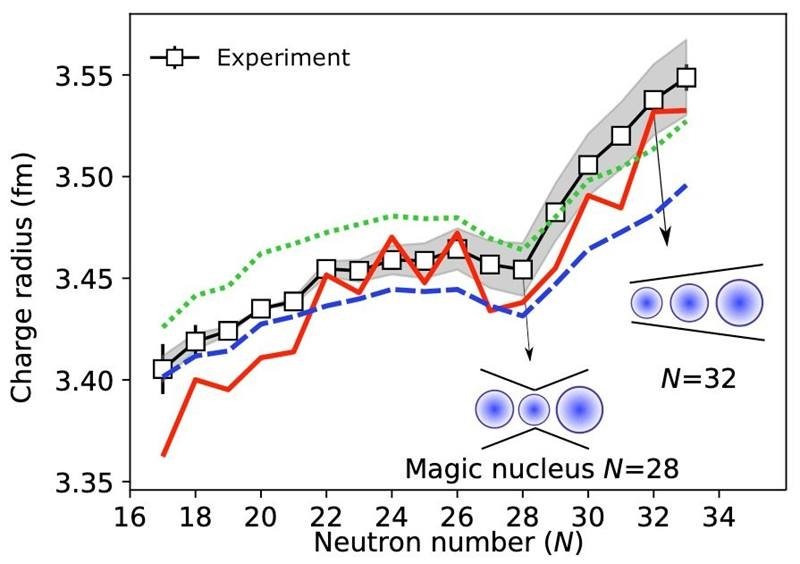 In atoms, protons and neutrons orbit the nucleus in one or more shells. Each shell has a specific limit on the number of protons or neutrons it can hold. When these shells are full, the resulting atomic nuclei are much more stable and compact than other nuclei. Physicists refer to the number of protons or neutrons in a full shell as “magic” numbers, with numbers 2, 8, 20, 28, 50, 82, and 126 widely recognized as being “magic” numbers. The number of protons and neutrons also determines the size of an atom’s nucleus, called its charge radius. Now, physicists have used measurements of nuclear charge radii at ISOLDE/CERN combined with theoretical models to remove the magic from one number. The results show that a previously reported “magicity” at a neutron number of 32 does not appear in the neutron-rich potassium isotopes. The research also finds that some models do not capture the sharp increase in charge radii for magic numbers beyond 28.

Experiment and theory now agree that the neutron number 32 is not magic in isotopes of potassium. The revised description of charge radii beyond neutron number 28 exposes problems in some of the best current models of nuclear theory. The Facility for Rare Isotope Beams (FRIB) will continue this research by measuring global properties of short-lived nuclei in the neutron number 28 region. FRIB is scheduled to open in 2022. Magic numbers may predict the maximum number of neutrons a single nucleus can contain.

In this new research, scientists report measurements of charge radii in neutron-rich isotopes of potassium exhibit no kink across neutron number 32. This means this number is no longer “magic.” The research also shows that the dramatic increase in charge radii beyond neutron number 28 is not well captured in models that employ nuclear forces. The research used two types of theoretical models. Coupled-cluster theory models the nucleus using protons and neutrons and the forces between them. Density-functional theory employs densities and currents of protons and neutrons. The trend of the charge radii across the neutron number of 32 does not display a “kink” similar to what is seen at the magic neutron number of 28, as shown in the figure above.

Calculating charge radii for the sequence of potassium isotopes from inter-nucleon forces required new theoretical developments and was made possible by access to the SUMMIT supercomputer at the Oak Ridge Leadership Computing Facility. The steep increase in charge radii beyond neutron number 32 poses challenges for nuclear models that explore forces between two and three nucleons. This trend is captured by density functional theory. However, density functional theory overestimates the odd–even staggering effect in charge radii (shown in the red line in the figure above). These results impact the evolution of structure as more and more neutrons are added to an atomic nucleus. They will certainly stimulate further experimental studies of neutron-rich nuclei at FRIB.

This work was supported by the Department of Energy Office of Science, Office of Nuclear Physics. Computer time was provided by the Innovative and Novel Computational Impact on Theory and Experiment (INCITE) program. This research used resources of the Oak Ridge Leadership Computing Facility located at Oak Ridge National Laboratory.