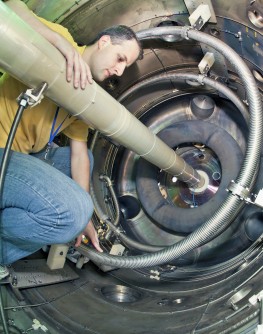 Newswise — Clayton Myers, a 2015 graduate of the Program in Plasma Physics in the Princeton Department of Astrophysical Sciences who did his research at the U.S. Department of Energy’s Princeton Plasma Physics Laboratory (PPPL), has won the 2018 Dissertation Prize awarded by the Laboratory Astrophysics Division (LAD) of the American Astronomical Society (AAS). Myers, now a physicist at Sandia National Laboratory, received the award for his work on the Magnetic Reconnection Experiment (MRX) at PPPL. The annual prize goes to scientists who have completed their dissertations within three years of the award year.

Myers’ thesis, titled “Laboratory Study of the Equilibrium and Eruption of Line-Tied Magnetic Flux Ropes in the Solar Corona,” gave rise to several first-authored papers that included a Nature magazine piece describing a previously unknown mechanism that halts solar eruptions. The award cited his dissertation, “For developing a novel laboratory platform to investigate the magnetohydrodynamic instabilities that drive solar eruptions, and for discovering a new failed eruption regime where the torus instability is halted by a dynamic tension force.”

Myers, whose Nature paper drew on innovative MRX experiments, said he was honored “to be recognized in an emerging field that lies at the interface between laboratory plasmas and astrophysical events.” Advising the dissertation were PPPL physicists Masaaki Yamada and Hantao Ji.

In his thesis, Myers demonstrated the value of laboratory experiments to test, confirm, or challenge state-of-the art understanding of astronomical observations developed through modeling, and to discover new physics beyond the boundary of current knowledge. Such experiments complement astronomical sightings that are limited by the resolution and accessibility of observations and by the conditions of numerical modeling.

Myers holds a bachelor’s of science degree from Cornell University and worked on diverse projects at PPPL. He conducted magnetic reconnection experiments while earning his doctorate and then moved to the National Spherical Torus Experiment-Upgrade (NSTX-U), joining the team that conducted the first 10 weeks of operation on the upgraded facility.  “Every project I have worked on has focused on the interaction between plasmas and magnetic fields,” he said. “Fusion and astrophysics are linked by that common thread.”

The NSTX-U studies fusion, the fusing of light elements that powers the sun and stars and creates massive amounts of energy. Scientists seek to create fusion on Earth for a virtually inexhaustible supply of power to generate electricity.

At Sandia National Laboratory, Myers works on the Z machine, the world’s most powerful pulsed-power facility and x-ray generator, which produces high energy density plasmas that are used to study fusion and the physics of nuclear weapons. This approach to fusion differs from experiments on the NSTX-U, which confines low-density plasma in magnetic fields to produce fusion reactions.

Myers is the seventh Program in Plasma Physics graduate to win a top dissertation award and the first to receive the AAS-LAD prize. Previous winners of the Marshall N. Rosenbluth Outstanding Doctoral Thesis Award, a prize given by the American Physical Society and named for a distinguished physicist at PPPL and General Atomics, were Jonathan Squire, 2017; Jong-Kyu Park, 2010; Yang Ren, 2008; Mark Herrmann, 2000; and Alan Beer, 1996. Also honored was Seth Dorfman, who received the 2013 Fred L. Scarf Award from the American Geophysical Union for outstanding dissertation research that contributes directly to solar planetary sciences.