The Pellet Stove Design Challenge: We Have a Winner! 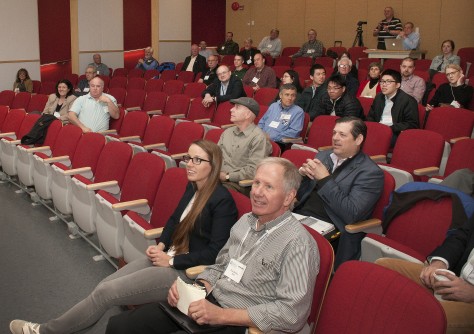 Tom Butcher and Rebecca Trojanowski, along with other participants in the Challenge, await the results of the judging 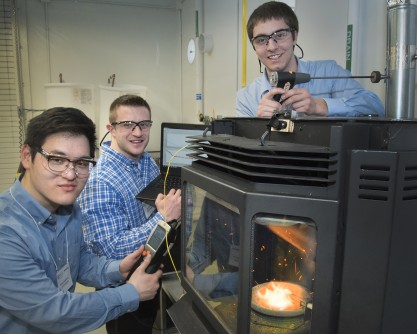 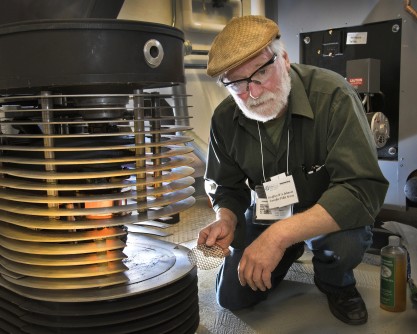 Geoffrey Johnson, inventor of the Torrefire, one of the first radiant heat pellet stoves. 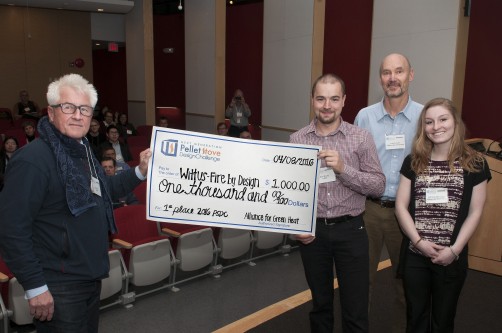 At the award ceremony are from left, Neils Wittus of Wittus –Fire by Design, the company that developed the PEWOS stove, engineer Rene Bindig, and John Ackerly and Gabriella McConnel from the Alliance for Green Heat. 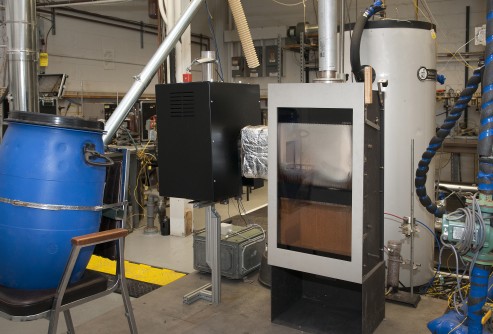 The prototype PEWOS stove is a combination of a downdraft stove and a newly developed two-stage pellet burner.

Newswise — Tom Butcher, leader of the Energy Conversion Group at the U.S. Department of Energy’s Brookhaven National Laboratory, has been quoted as saying that burning wood fuel cleanly and efficiently on a small scale is not rocket science—it’s harder. The truth of that remark was on display at Brookhaven Lab last week, where finalists competed to be designated the top-performing pellet stove. The three-day Pellet Stove Design Challenge, organized by the Alliance for Green Heat, featured stove demonstrations and testing as well as presentations and round-table discussions on a variety of issues.

The workshop began with seven identified finalist stoves competing for recognition in low emissions and high efficiency. The winner was the German PEWOS, a prototype pellet burner connected to a downdraft wood log stove with a catalyst and a controller system.

Rene Bindig of EmTechEngineering in Leipzig, Germany, is the engineer behind the winning design.

“We had some very nice discussions and I was also impressed by the other stoves,” he said. “Originally I wanted to visit the workshops but I missed them completely because I was so interested in the stoves.”

While clearly proud of his team’s accomplishment, Bindig said winning was secondary to the educational opportunity the event provided.

“I think we’re all interested in trying to reduce CO2 emissions, so it’s a really great challenge for all of us to see what’s out there and what we can do,” he said. “Making money is important too, but this is a really interesting challenge and cause.”

The Challenge was the third in a series of workshops examining the efficiency of wood heat systems. EmTechEngineering entered wood stoves in the two earlier competitions and came in second both times.

“These stove events serve to identify and highlight innovations which can result in far cleaner use of renewable biomass fuels,” said Butcher. “These innovations are critically needed if biomass is to be a part of our energy future.”

Approximately one million pellet stoves are currently in use in North America, most made by just a handful of companies. The Challenge series involves stakeholder engagement in testing and assessing stoves, the opportunity to see and understand state—of-the-art testing methodologies, and workshops and roundtables bringing together industry, regulators, air-quality groups, and non-profits.

Also, two student teams participated in the Challenge: SUNY Buffalo brought a commercially available stove being used for the team’s senior project. The team aims to create a system that will measure emissions and self-calculate efficiency. A team from SUNY Stony Brook did not bring a stove, but gave a presentation on its research on pellet stove emissions and efficiency.

The participants praised the unusual format for this event, which included both technical presentations and a great deal of hands-on, live combustion testing. Brookhaven Lab provides an excellent venue for this format with a number of labs suitable for such testing. 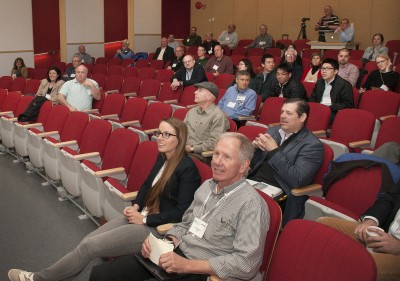 Caption: Tom Butcher and Rebecca Trojanowski, along with other participants in the Challenge, await the results of the judging 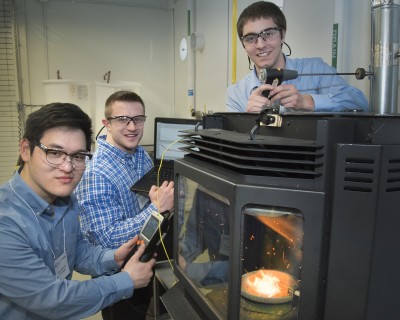 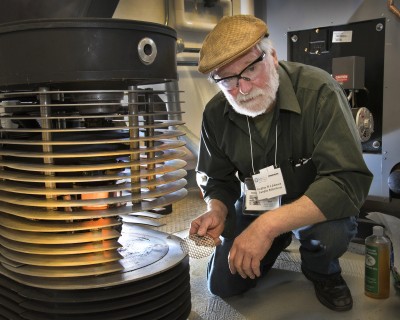 Caption: Geoffrey Johnson, inventor of the Torrefire, one of the first radiant heat pellet stoves. 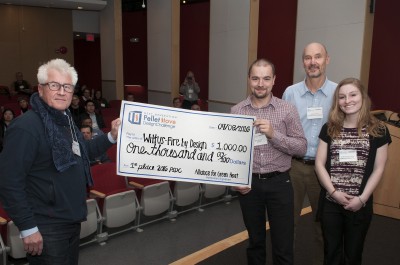 Caption: At the award ceremony are from left, Neils Wittus of Wittus –Fire by Design, the company that developed the PEWOS stove, engineer Rene Bindig, and John Ackerly and Gabriella McConnel from the Alliance for Green Heat. 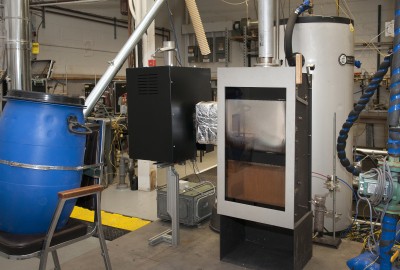 Caption: The prototype PEWOS stove is a combination of a downdraft stove and a newly developed two-stage pellet burner.