The new “rodeo algorithm” approach for preparing energy states of complex systems on a quantum computer is exponentially faster than other algorithms. 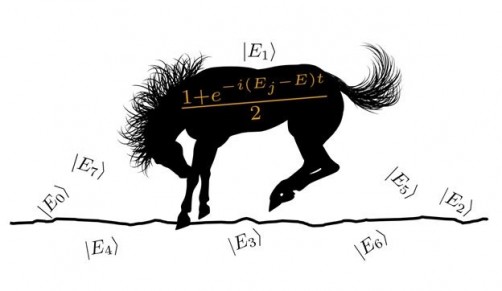 The rodeo algorithm shakes off all quantum energy states (E) until only the desired energy state remains.

Quantum physics governs the domain of the very small. To study the behavior of the smallest components of the universe, scientists simulate quantum systems. In these quantum systems, the particles have many potential values. For example, the various particles can have a huge range of different energy levels. This makes quantum systems incredibly difficult to simulate using a conventional computer. Nuclear physics researchers have now proposed a new way to prepare energy states of a simulated quantum system that uses a quantum computer. To use the system, researchers first determine the energy state they are interested in creating. The quantum computer starts the system in a much simpler state but with many variables that can be modified. It then produces different combinations of how the variables evolve over time. Then, like a bucking horse in a rodeo, the computer kicks off the energy states that don’t match researchers’ targets.

The rodeo algorithm requires relatively few quantum bits (“qubits”) and quantum gates, just slightly more than the bare minimum needed to evolve a quantum system over time. In a quantum computer, qubits fill the same role as the bits in a conventional digital computer. Quantum gates are the quantum computing equivalent of circuits. The quantum computing devices that already exist can simulate small quantum systems. However, for the purpose of preparing energy states, the rodeo algorithm is exponentially faster than other well-known quantum algorithms. With further developments like this, researchers see a viable path to using quantum computers to solve problems that cannot be addressed with conventional computers.

Primary funding was provided by the Department of Energy Office of Science, Nuclear Physics program through the “Quantum Horizons: QIS Research and Innovation for Nuclear Science” effort.