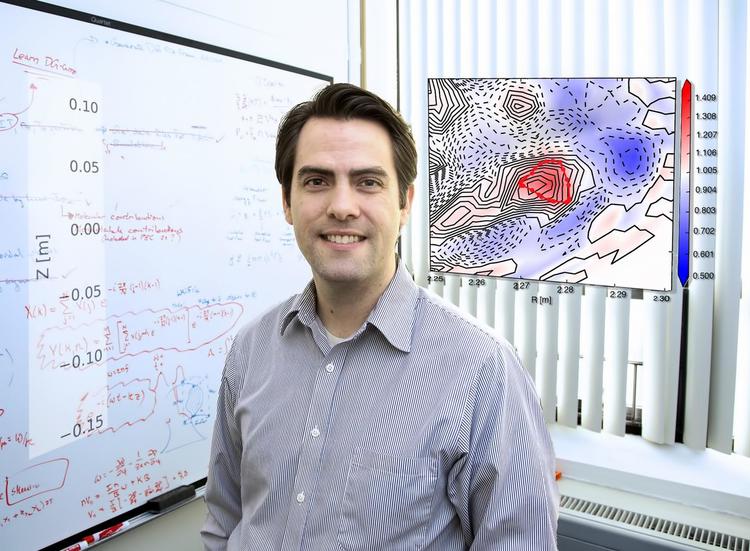 Newswise — A key requirement for future facilities that aim to capture and control on Earth the fusion energy that drives the sun and stars is accurate predictions of the pressure of the plasma — the hot, charged gas that fuels fusion reactions inside doughnut-shaped tokamaks that house the reactions. Central to these predictions is forecasting the pressure that the scrape-off layer, the thin strip of gas at the edge of the plasma, exerts on the divertor — the device that exhausts waste heat from fusion reactions.

Researchers at the U.S. Department of Energy’s (DOE) Princeton Plasma Physics Laboratory (PPPL) have developed new insights into the physics governing the balance of pressure in the scrape-off layer. This balance must ensure that the pressure of the plasma throughout the tokamak is high enough to produce a largely self-heating fusion reaction. The balance must also limit the potentially damaging impact of heat and plasma particles that strike the divertor and other plasma-facing components of the tokamak.

“Previous simple assumptions about the balance of pressure in the scrape-off layer are incomplete,” said PPPL physicist Michael Churchill, lead author of a Nuclear Fusion paper that describes the new findings. “The codes that simulate the scrape-off layer have often thrown away important aspects of the physics, and the field is starting to recognize this.”

Fusion, the power that drives the sun and stars, is the fusing of light elements in the form of plasma — the hot, charged state of matter composed of free electrons and atomic nuclei — that generates massive amounts of energy. Scientists are seeking to replicate fusion on Earth for a virtually inexhaustible supply of power to generate electricity.

Churchill and PPPL colleagues determined the key factors behind the pressure balance by running the state-of-the-art XGCa computer code on the Cori and Edison supercomputers at the National Energy Research Scientific Computing Center (NERSC), a DOE Office of Science User Facility. The code treats plasma at a detailed kinetic — or particle motion— level rather than as a fluid.

Among key features found was the impact of the bulk drift of ions, an impact that previous codes have largely ignored. Such drifts “can play an integral role” the authors wrote, and “are very important to take into account.”

Also seen to be important in the momentum or pressure balance were the kinetic particle effects due to ions having different temperatures depending on their direction. Since the temperature of ions is hard to measure in the scrape-off layer, the paper says, “increased diagnostic efforts should be made to accurately measure the ion temperature and flows and thus enable a better understanding of the role of ions in the SOL.”

The new findings could improve understanding of the scrape-off layer pressure at the divertor, Churchill said, and could lead to accurate forecasts for the international ITER experiment under construction in France and other next-generation tokamaks.