Atomic-scale simulations predict how to use nanoparticles to increase hydrogen production. 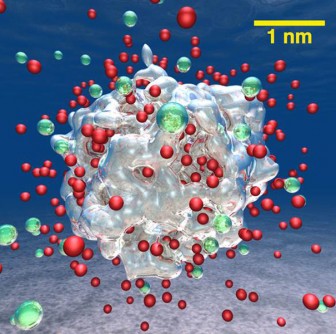 A snapshot from a large quantum molecular dynamics simulation of the production of hydrogen molecules (green) from an aluminum-lithium alloy nanoparticle containing 16,661 atoms (represented by the silver contour of charge density) and dissolved charged lithium atoms (red). For clarity, the water molecules were removed from the snapshot. Simulations were carried out at the Argonne Leadership Computing Facility.

What if industrial waste water could become fuel? With affordable, long-lasting catalysts, water could be split to produce hydrogen that could be used to power fuel cells or combustion engines. By conducting complex simulations, scientists showed that adding lithium to aluminum nanoparticles results in orders-of-magnitude faster water-splitting reactions and higher hydrogen production rates compared to pure aluminum nanoparticles. The lithium allowed all the aluminum atoms to react, which increased yields.

Molecular hydrogen (H2) is an eco-friendly fuel because only waste water is produced when it is burned in combustion engines or used in fuel cells to power cars. The challenge is “Where do we get the hydrogen?” In a sustainable hydrogen production cycle, metallic alloys can split water (H2O) to produce H2. However, ordinary-sized metal particles quickly become blocked from further reactions. Scientists led by the University of Southern California, Los Angeles, have predicted a dramatic increase in hydrogen production from water using alloy nanoparticles based on an equal mixture of aluminum and lithium atoms. During the crucial steps of surface catalysis, metal atoms attract the oxygen (O) atoms in water and release hydrogen. The cycle is completed when the metal is restored to its form without oxygen, which requires energy, e.g., solar or thermal energy. To predict material properties without introducing additional assumptions, large quantum molecular dynamics simulations were performed on 786,432 computer processors for lithium-aluminum nanoparticles. The simulations contained up to 16,000 atoms and explained rapid hydrogen production with higher yields for these nanoparticles in water. Four specific features were found to reduce the energy required for the reactions already at room temperature: (1) Abundant neighboring pairs of lithium and aluminum atoms are needed to produce hydroxyl (Li-OH) and hydride (Al-H) groups. (2) Lithium atoms transferred charge to the metallic cluster of aluminum atoms forming a negatively charged superanion dispersed with positively charged lithium atoms. (3) Surprisingly, the continuous formation and breaking of bridges by oxygen bonding to lithium and aluminum also played an active role by breaking oxygen-hydrogen bonds and forming aluminum-oxygen bonds. (4) Lithium and OH dissolved and created a more basic solution that inhibited the formation of a reaction-stopping oxide layer on the nanoparticle surface. These atomistic mechanisms not only explain recent experimental findings, but also predict hydrogen production to scale up to industrially relevant particle sizes because of its dependence on the number of surface atoms.

This work was supported by the U.S. Department of Energy, Office of Science, Office of Basic Energy Sciences; Argonne Leadership Computing Facility under the INCITE program, a DOE Office of Science User Facility; and the Japanese KAKENHI.