Better understanding plastics’ underlying chemistry may revolutionize how we use these ubiquitous materials. 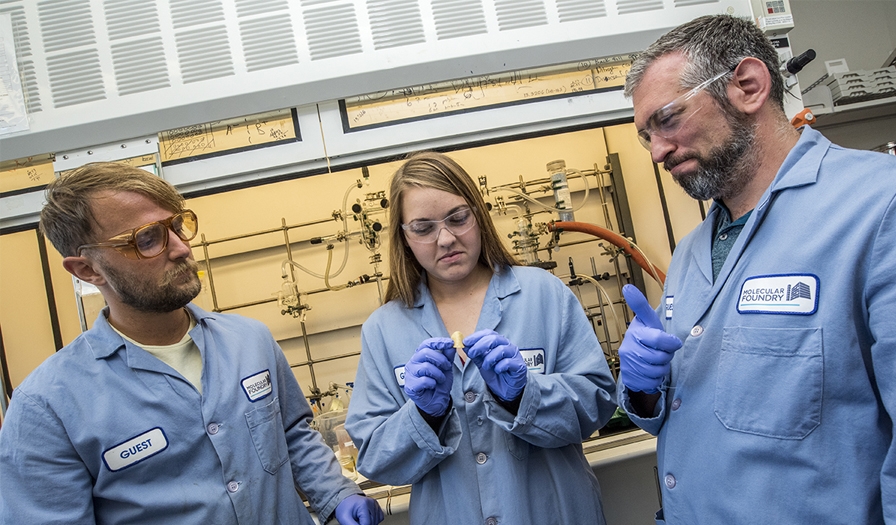 Researchers at Berkeley Lab’s Molecular Foundry user facility developed a polymer that they can break down and recreate. It could lead to cyclical plastics that can be recycled over and over again.

Newswise — Too much natural gas. A small adjustment to an experiment. These ingredients came together to produce one of the most influential materials ever invented.

In the wake of World War II, companies were left with excess fossil fuels with no war to consume them. Looking to turn extra natural gas into liquid fuel, the Philips Petroleum Company hired chemists J. Paul Hogan and Robert L. Banks. As they experimented with turning natural gas into gasoline, they tweaked their catalyst – a material used to speed up chemical reactions. They expected it would make a liquid. Instead, the process produced something entirely new. Much to their surprise, it was a solid white material. In June 1951, they discovered polypropylene, now one of the most common plastics in the world.

Nearly 75 years later, the products derived from this innovation are ubiquitous. Plastics are found nearly everywhere on Earth – even in sea ice in Antarctica.

“Plastics are one of the enormous chemical success stories of the 20th century,” said Susannah Scott, a chemistry professor at University of California Santa Barbara whose work is supported by the U.S. Department of Energy’s (DOE) Office of Science. “Starting from a point where they were virtually unknown, small-volume, curiosity materials, to today when it’s hard to find an aspect of modern life that they’re not implicated in.”

But this usefulness brings consequences. There are more than 110 pounds of plastic per person produced in the world each year. At the current rate of production and disposal, there will be more plastics by mass in the ocean than fish by 2050.

Current recycling systems won’t provide us a way out of this challenge. In the U.S., less than 10 percent of discarded plastics are recycled. The rest are dumped in landfills or burned in incinerators.

Even if we could capture all the discarded plastics, they would have limited uses. Most recycling facilities heat up the plastic to reshape it. But unlike glass or metal, the more often plastic is recycled, the less useful it becomes. Its quality goes down and it can be used in a smaller variety of products.

New solutions may be possible. But they’ll require innovation on every level, from basic science in laboratories to commercial collection techniques in neighborhoods. To facilitate this shift, the DOE’s Office of Science is supporting discovery research to tackle the problem.

Plastics are polymers, substances created by linking small molecular units together over and over again into long chains of atoms. These chains of atoms are called macromolecules. They’re made up of chemical bonds between carbon and other elements, including oxygen, nitrogen, and hydrogen.

This seemingly simple structure hides tremendous complexity. Once formed, those bonds are difficult to break. That’s why plastics are so durable. To increase their versatility, many plastics include dyes and other additives. Many products even use several types of plastic, such as squeeze tubes of applesauce that have up to nine layers of different materials. Then, once a piece of plastic is thrown out, it’s mixed together with many other types of plastic. All of these different materials within the waste stream make plastics particularly difficult to recycle.

“That complexity is going to be a huge challenge from a plastics recycling perspective,” said LaShanda Korley, materials science and chemical and biomedical engineering professor at the University of Delaware and director of the new DOE Energy Frontier Research Center (EFRC) Center for Plastics Innovation.

Past research has largely focused on making new materials, with little investment in designing materials that can be easily recycled.

“We have almost been too successful at designing synthetic materials,” said Scott, who has spent most of her career learning how to make new plastics. “The challenge now is, how do we undo that?”

“From a science perspective, we have really barely touched the surface of understanding what needs to be done and how to do it,” said Aaron Sadow, chemistry professor at Iowa State University, senior scientist at DOE’s Ames Laboratory, and director of another new EFRC, the Institute for Cooperative Upcycling of Plastics.

The first and perhaps most obvious question is how to break plastics’ tough chemical bonds. Current methods require large amounts of energy and high temperatures. In addition, most methods break bonds willy-nilly. They don’t allow scientists control over where and how the bonds break. They need this control to form new, specific products. These processes also result in a lot of unwanted products or produce even stronger bonds that are more difficult to break later.

“We’ve learned that the processes are probably much more simple than we anticipated in some sense and way more complex in others,” Sadow said. “We’ve learned that chain length matters a lot and we didn’t necessarily expect that.”

After those chains are broken into smaller links, scientists then want to know how to put them back together in a way the bonds can be easily broken again later on. Alternatively, they’re looking at how they can transform an existing polymer into a completely new product.

“There’s a heck of a lot of plastics out there,” said Karen Winey, materials science and engineering professor at the University of Pennsylvania and co-chair of the DOE Basic Energy Sciences Roundtable on Chemical Upcycling of Polymers. “It’s a huge, diverse problem, so we need lots of solutions.”

Circular plastics can be broken down to their most basic components and put back together into new products over and over again. To achieve circular recycling, the process would need to produce plastics that are just as useful as existing ones, break down only when you want them to, and be both cost- and energy-efficient. Meeting these requirements may require designing new links for our polymer chains.

But we may have already found one of them — by chance. Researchers at The Molecular Foundry, an Office of Science user facility at Lawrence Berkeley National Laboratory, realized a polymer they designed was acting oddly when they used an acid to clean the polymer off the glassware used to prepare it. Brett Helms, a Molecular Foundry scientist, said, “We noticed that parts of the material would start to flake off of our amber-colored resins, like you would see in Jurassic Park.” The flakes looked suspiciously like the starting material they had used to make the polymer.

Analyzing the flakes confirmed their suspicions. They had designed a polymer that could be built up and then broken back down into its chain links! If they dunked it in a very acidic solution at room temperature, voila – back to basics. With further experimentation, they discovered how to remove additives and dyes. They also figured out how to put the pieces back together effectively. The resulting products have no loss in performance compared to the original.

“The fact that you can chemically recycle the polymer with low intensity is unique and enables a circular economy of polymers,” said Helms. Since their 2019 discovery, Helms and his team have been working with partners to formulate these polymers for manufacturing and source them from sustainable feedstocks.

Even if we switched completely to circular plastics today, we’d still have more than eight billion metric tons of existing plastics to deal with.

Upcycling plastic waste could turn it into products with higher value, such as transportation fuels, waxes, lubricants, or new materials. Korley compared it to a designer on HGTV taking a barn door and restructuring it to be used in a bathroom. Scientists are particularly interested in finding a process to upcycle polyolefins, one of the cheapest, most common types of plastics. They’re used in many single-use plastic products, like grocery bags.

Two Office of Science-supported studies have used a platinum-based catalyst to transform plastic. One 2019 study led by Dr. Massimiliano Delferro used tiny nanoparticles of platinum that bind to plastic. The more platinum in the catalyst, the more the plastic broke down into a liquid that could be used as a lubricant.

“It was part inspiration and part serendipity,” said Scott, who was a co-author on this study. “The chemistry surprised me.” While the team thought the catalyst would break apart the large molecules, they didn’t expect to create such a valuable product.

In a 2020 study conducted at the same time with an overlapping team of researchers, the scientists mixed another platinum-based catalyst together with polyethylene. They aimed to produce aromatics – chemicals that can be used as lubricants. Running the process for 24 hours at about 540 degrees F, the scientists transformed almost 70 percent of a plastic bag into a mixture of liquid and waxes.

Describing her surprise, Scott said, “Wow, we found a reaction where the waste plastic is actually the preferred starting point for this reaction.”

These studies are just the start. DOE has launched the Plastics Innovation Challenge to further these effort to reduce plastic waste, position the U.S. as a leader in recycling technologies, and accelerate manufacturing circular plastics. This effort will help strengthen relationships between the Office of Science’s programs, national laboratories, universities, and industry partners.

However, the biggest issues may not be scientific. Creating economically competitive plastics and establishing new recycling processes pose major barriers.

But basic science may have a role there too. The scientists tackling the underlying questions of chemistry are collaborating with economists, social science researchers, and private companies. They’re working to understand where chemical recycling makes sense compared to current mechanical recycling and where there are opportunities for new materials.

“There is the expectation that this is a partnership. Yes, this is basic science. But it should not be basic science in a vacuum,” said Korley.

Like the research in the 1950s, basic research on plastics now could have big impacts that ripple through society. As Sadow said, “It’s rare that the basic science we work on has such a direct line to potential positive outcomes for lots of people.”