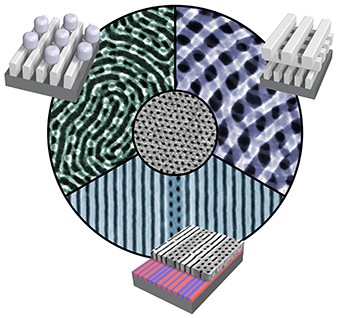 Diverse, never-before seen nanostructures. Scientists developed a suite of methods that can coax simple nanomaterials (example shown in center) into spontaneously forming much more complex nanostructures. Three examples are shown, along with schematics of the three-dimensional order.

Making small structures, at the nanometer length scale, is extremely difficult. However, these structures are vital for faster, denser more energy-efficient computing devices. Scientists have devised materials that can create complex three-dimensional structures. They did it by exploiting how molecules self-assemble, spontaneously packing into nano-sized shapes. Also, they took advantage of how materials respond to the surfaces they are cast on. When correctly designed, materials can be coaxed into never-before-seen structures.

Self-assembly is a powerful concept for making nanoscale structures where molecules are designed to spontaneously pack themselves into the desired shape or pattern without lithographic patterning. However, conventional self-assembly yields a small library of very simple shapes. In this work, scientists at the Center for Functional Nanomaterials (CFN) devised responsive self-assembling systems, where the molecules reorganize in response to external influences. In particular, this enables simple molecules to form much more complex patterns—indeed they can form three-dimensional nanostructures that would never form using conventional self-assembling materials.

Scientists at the CFN used thin films of block copolymers (BCP)—chains of two distinct molecules linked together. Through well-established techniques, the scientists spread BCP films across a substrate, applied heat, and watched the material self-assemble into a prescribed configuration. To make subsequent layers “talk to each other,” the team infused each layer with a vapor of inorganic molecules to seal the structure, which allowed each layer to act as a template for the one above it. This technique demonstrated the formation of a broad range of nanostructures never before observed. This fundamental breakthrough substantially broadens the diversity and complexity of structures that can be made with self-assembly, and correspondingly broadens the range of potential applications. For example, intricate three-dimensional nanostructures could yield transformative improvements in nano-porous membranes for water purification, bio-sensing, catalysis, or dense computer memories and microprocessors.

This research used resources of the Center for Functional Nanomaterials and the National Synchrotron Light Source II, which are U.S. Department of Energy Office of Science user facilities, at Brookhaven National Laboratory under contract DE-SC0012704.