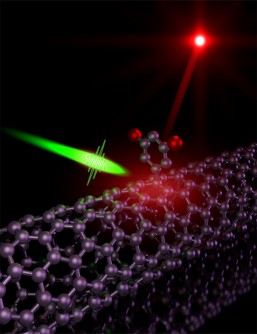 The schematic shows the emission of a single photon (red) from a chemically modified carbon nanotube when excited by green light.

Knowing the details of the quantum world—electrons and packets of light called photons—could radically improve computers and sensors. A critical component to making devices that harness the quantum world is a source that emits a regular stream of single photons. Scientists at the Center for Integrated Nanotechnologies and their colleagues chemically modified tiny tubes of carbon atoms. These tubes are the first material to emit single photons at room temperature and telecom wavelengths. No other material system has been able to meet these two critical operational conditions simultaneously.

This critical combination of features makes integrating devices that exploit the quantum world with existing optical networks a very real possibility. That is, the carbon nanotubes that allow for ultra secure data encryption could be used with today’s telecom network. The carbon nanotubes could also be integrated into devices for more sensitive sensors and future quantum computers.

The ability to integrate fiber-based quantum information technology into existing optical networks would be a significant step towards applications in quantum communication. To achieve this, quantum light sources must be able to emit single photons at telecommunication wavelengths and at room temperature. This combination of features has been elusive until now, despite two decades of research efforts. Some systems (e.g., self-assembled quantum dots) emit at telecommunication wavelengths but require cryogenic cooling. Other systems (for example, diamond nitrogen-vacancy centers) operate at room temperature but can only emit in the visible spectral range. Scientists at the Center for Integrated Nanotechnologies and their collaborators have produced functionalized carbon nanotubes that have both of these critical features. Carbon nanotubes had been previously identified as a promising quantum light source; however, the unstable photon emissions they generated were problematic. The answer uncovered by scientists at the Center for Integrated Nanotechnologies was to chemically modify the nanotubes through aryl-diazonium reactions. This introduced defects to the nanotubes that allowed for controllable single-photon emission at both room temperature and telecommunication wavelengths. The team also demonstrated that the emission wavelength was tunable. Just as the tension and length of a violin string can be adjusted to achieve different frequencies, the diameter of the functionalized carbon nanotubes can be varied to generate different emission wavelengths. Not only do these results have significance for basic science, including functionalization chemistry and quantum metrology, but they also open the door to exciting developments in quantum technologies.

This work was conducted in part at the Center for Integrated Nanotechnologies, a Department of Energy, Office of Science user facility and supported in part by Los Alamos National Laboratory Directed Research and Development funds. This effort was also supported at AIST in part by the Japan Society for the Promotion of Science Grants-in-Aid for Scientific Research (KAKENHI). National Renewable Energy Laboratory researchers were supported by the Solar Photochemistry Program of the Department of Energy, Office of Science, Basic Energy Sciences, Division of Chemical Sciences, Geosciences and Biosciences. W.G. and J.K. acknowledge support from the Robert A. Welch Foundation.