Validating models for next-generation fusion facilities with the PPPL flagship 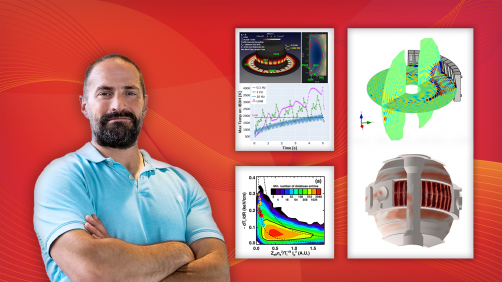 Physicist Walter Guttenfelder with figures from the paper he authored with PPPL researchers including members of the NSTX-U team and 23 collaborative institutions world-wide.

Newswise — The flagship fusion facility of the U.S. Department of Energy’s (DOE) Princeton Plasma Physics Laboratory (PPPL) could serve as the model for an economically attractive next-generation fusion pilot plant, according to recent simulations and analysis. The pilot plant could become the next U.S. step for harvesting on Earth the fusion power that drives the sun and stars as a safe and clean source of power for generating electricity.

The U.S. fusion community has recently urged an immediate effort to design and construct a cost-effective pilot plant to generate electricity in the 2040s. Unique capabilities of the PPPL flagship, the National Spherical Torus Experiment-Upgrade (NSTX-U) that is currently under repair, have made its design a candidate for that role. “It’s all about trying to project whether this route is favorable for a cost-effective pilot plant and beyond,” said principal physicist Walter Guttenfelder, lead author of a paper in the journal Nuclear Fusion that details the latest findings.

Fusion produces vast energy by combining light elements such as hydrogen in the form of plasma, the hot, charged state of matter composed of free electrons and atomic nuclei, or ions. Plasma composes 99 percent of the visible universe and fuels fusion reactions that produce heat and light that create and sustain life on Earth.

The spherically shaped NSTX-U produces high-pressure plasmas required for fusion reactions in a relatively compact and cost-effective configuration.  Operating capabilities of the facility are greatly enhanced over its pre-upgraded predecessor. “The primary motivation for NSTX-U is to push up to even higher powers, higher magnetic fields supporting high-temperature plasmas to see if previously observed favorable trends continue,” Guttenfelder said.

Recent theory, analysis and modeling from the NSTX-U research team predict that many of these trends should be demonstrated in new NSTX-U experiments. Predicted operating conditions for the NSTX-U include the following:

Starting up plasma. Modeling has been developed to efficiently optimize plasma initiation and ramp up, and it was applied to help a spherical tokamak facility in the United Kingdom produce its first plasma.

Understanding the plasma edge. New models simulate the dynamics between the edge of the plasma and the tokamak wall that can determine whether the core of the plasma will reach the 150 million-degree temperatures needed to produce fusion reactions.

Novel techniques. Simulations suggest many novel techniques for shielding interior NSTX-U components from blasts of exhaust heat from fusion reactions. Among these concepts is the use of vaporized lithium to reduce the impact of heat flux.

Stable performance. Studies found that a window for NSTX-U performance can remain stable in the face of instabilities that could degrade operations.

What to avoid. Increased understanding of the conditions to avoid come from excellent agreement between the predicted range of unstable plasmas and a large experimental data base.

Considerable progress has therefore been made in understanding and projecting how NSTX-U can advance the development of fusion energy, the Nuclear Fusion paper says. “The next step,” said Guttenfelder, “is to see if new experiments validate what we’re predicting, and to refine the predictions if not. These steps together will enable more confident projections for future devices.”

Support for this research comes from the DOE Office of Science with many simulations produced using resources of the National Energy Research Scientific Computing Center, a DOE Office of Science User Facility. Coauthors of the paper include researchers from PPPL and 23 collaborative institutions world-wide.