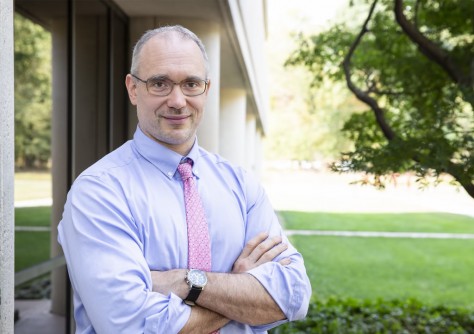 Newswise — Stefan Gerhardt, who heads research operations and serves as deputy director of the recovery project for the flagship fusion facility at the U.S. Department of Energy’s (DOE) Princeton Plasma Physics Laboratory (PPPL), has been elected a 2019 American Physical Society (APS) Fellow. The APS annually recognizes as fellows no more than one-half of one percent of its more than 55,000 worldwide members.

The society cited Gerhardt for his “outstanding contributions to the experimental characterization and understanding of the magneto-hydrodynamic [MHD] stability of magnetically confined plasmas spanning multiple fusion configurations.” Such stability describes the properties of the plasma that fuels fusion reactions when treated as an electrically conducting fluid.

“It’s certainly an honor to be in the group of APS fellows at this laboratory,” said Gerhardt, whose wide-ranging interests extend from plasma control and stability to the engineering and operation of the National Spherical Torus Experiment-Upgrade (NSTX-U), the flagship fusion facility at PPPL, and other tokamak fusion devices. He calls the NSTX-U team he leads “marvelous to work with. They’re full of mentors and teachers.”

Jonathan Menard, deputy director for research at PPPL, previously headed research on the NSTX-U and has worked closely with Gerhardt. “Stefan is a highly versatile researcher with a deep experimental understanding of plasma MHD stability and toroidal physics more generally,” Menard said of Gerhardt’s broad knowledge of the behavior of plasma in doughnut-shaped, or toroidal, facilities. “This background is helping inform Stefan’s excellent physics requirements and systems engineering work on the Recovery Project,” Menard said.

Gerhardt moved frequently with his family while growing up in the Midwest and graduated from high school in Kansas. As an undergraduate student at the University of Wisconsin-Madison, from which he received his bachelor’s degree in 1998, “I was a physics major looking for a job,” he said, “and the plasma physics group had openings.”

While working on the Madison Symmetric Torus, a plasma research facility at Wisconsin, Gerhardt spotted a flyer for PPPL summer internships under the National Undergraduate Fellowship Program. He spent the summer of 1996 working with physicists Masaaki Yamada and Hantao Ji on the PPPL Magnetic Reconnection Experiment (MRX), which studies the convergence and highly energetic separation of magnetic field lines. “I had a lot of opportunities on the MRX,” Gerhardt recalled. “You can be an engineer, technician and physicist on the MRX all at the same time.”

Returning to the University of Wisconsin, Gerhardt earned his doctorate in electrical engineering in 2004.  He joined PPPL as a postdoctoral fellow that year and went on to become a staff research physicist first on the MRX and then on the National Spherical Tokamak Experiment (NSTX), the predecessor to the NSTX-U.

The APS honor is Gerhardt’s most recent award. His doctoral dissertation won both the APS Marshall Rosenbluth Award for Outstanding Doctoral Dissertation in Plasma Physics and the University of Wisconsin’s Harold Peterson Award for Outstanding Dissertation in Electrical Engineering. In 2009 he received a Presidential Early Career Award in Science and Engineering, the predecessor to the current DOE Early Career Research Award, and in 2016 was recognized with a Fusion Power Associates Excellence in Fusion Engineering.

Such honors reflect Gerhardt’s broad interests and expertise in all things fusion and plasma physics. “I try to find interesting things in everything I do,” he said. “You can learn from everything and everybody. Plasma physics, engineering, even cost books — it’s just a matter of having the right attitude.”