Scarce compound is key for cellular metabolism and may help shape microbial communities that affect environmental cycles and bioenergy production. 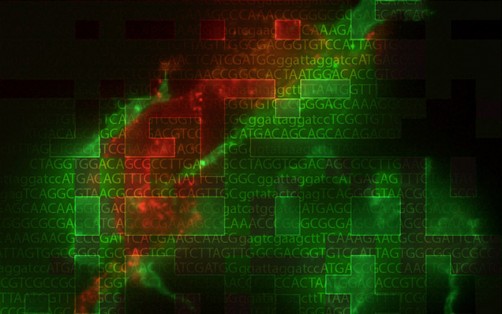 Researchers explore functions controlled by vitamin B12 and the importance for microbial communities.

Newswise — Vitamin B12, a substance produced by a few organisms but needed by nearly all of them, wields great power in the microbial world. It regulates the production of deoxyribonucleic acid (DNA) and vital proteins. A study revealed that this compound plays an even greater role in cellular metabolism and growth than previously thought. Vitamin B12 may even coordinate the behavior of complex microbial communities.

The findings suggest that vitamin B12 helps shape microbial communities. These communities are involved in wide-ranging processes from energy production, such as using microbes to produce biofuels and bioproducts, to environmental systems, such as microbes involved in elemental cycling and contaminant transformations.

Vitamin B12 is used by all domains of life to control the production of DNA and a variety of proteins that support cellular function, but this vitamin is only produced by certain bacterial and archaeal species. The study showed that this compound has an unexpectedly broad influence on metabolic processes important for synthesizing DNA, ribonucleic acid (RNA), and proteins. To explore vitamin B12’s role in cellular processes, researchers from Pacific Northwest National Laboratory, Sanford-Burnham-Prebys Medical Discovery Institute, and Polytech Nice-Sophia set out to identify which proteins bind to vitamin B12. To do so, they first developed a chemical probe that mimics vitamin B12 and then directly applied the probe to live Halomonas bacterial cells. The researchers next analyzed the probe-labeled proteins using an Orbitrap mass spectrometer at the Environmental Molecular Sciences Laboratory, a U.S. Department of Energy Office of Science user facility. They found that the vitamin B12-mimicking probe interacted with 41 different proteins, including enzymes involved in the synthesis and metabolism of another B vitamin called folate, an amino acid called methionine, and a compound called ubiquinone. These metabolic processes, in turn, increase the production of DNA, RNA, and proteins. The findings reveal vitamin B12 plays a more pivotal role in cellular growth and metabolism than previously thought. As a result, this scarce compound may facilitate the coordination of cell behavior in complex microbial communities, shaping their structure, stability, and overall function.