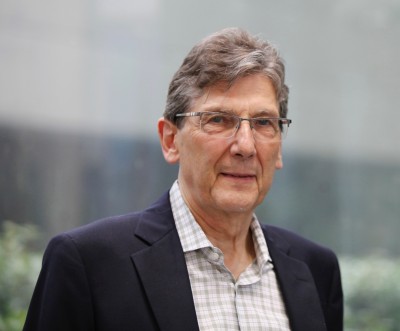 Newswise — For more than 30 years, Volker Burkert has made his home in the Commonwealth of Virginia and made lasting contributions to its scientific capabilities and accomplishments at the Department of Energy’s Thomas Jefferson National Accelerator Facility. Now, his home state has honored his long and outstanding career here in the Commonwealth by naming Burkert a Virginia Outstanding Scientist for 2019.

The announcement was made in early September by Governor Ralph Northam and the Science Museum of Virginia’s Chief Wonder Officer Richard Conti. Five STEM award recipients were announced, including two outstanding scientists, a designation reserved for scientists who “have made globally significant contributions to their field.”

Burkert joined Jefferson Lab in 1985 as a staff scientist. He worked initially on the development of the detector system for the lab’s Experimental Hall B, referred to as the CEBAF Large Acceptance Spectrometer, or CLAS. In 2003, he was appointed group leader of Hall B, where he directed a team of physicists, engineers and technicians in the implementation and operation of Hall B and its unique CLAS detector system on behalf of an international collaboration of more than 200 scientists.

His research with CLAS has focused on the structure of protons, neutrons and nuclei. He initiated the experimental program to search for the “missing” excited states of the proton and to reveal their internal structure, a program that is leading to a better understanding of an important phase in the evolution of the universe. He also pioneered research to explore the physical process that allows for 3D-imaging of the proton, which has led to the first determination of a mechanical property of the proton, its so-called internal pressure distribution.

“This award is an honor to all of those who have been involved in this research, foremost the CLAS collaboration and the group of 40 scientists, engineers and technicians at Jefferson Lab that I have had the privilege to lead,” Burkert said. “It is also a recognition of the U.S. Department of Energy and of Jefferson Lab management, who provided the means to realize our ideas of fundamental research.”

Burkert also oversaw the conceptual design of the upgrade of CLAS to CLAS12 as part of the 12 GeV CEBAF Upgrade. He has authored more than 300 peer-reviewed publications in scientific journals and was elected Fellow of the American Physical Society in 2004.

According to the announcement, Burkert was selected as a Virginia Outstanding Scientist Award recipient for his foresight and leadership in expanding the CLAS nuclear and particle physics detector capabilities, and utilizing the full power of CLAS and Jefferson Lab to deliver new insights into the origin of visible mass in our universe.

In mid-September, Burkert will officially pass Hall B leadership to the next hall leader.

Starting October 1, he will join the leadership team for a proposed Electron-Ion Collider. An EIC will be a unique, world-class machine for delving deeper than ever before into the building blocks of matter. Burkert also plans to continue his research efforts here in the Commonwealth at Jefferson Lab by harvesting results from measurements with CLAS and CLAS12 and by supporting the newly established Center for Nuclear Femtography.

Burkert will receive his award at the Science Museum of Virginia on Thursday, Sept. 26.