Soil warming leads to more complex, larger, and more connected networks of microbes in those soils 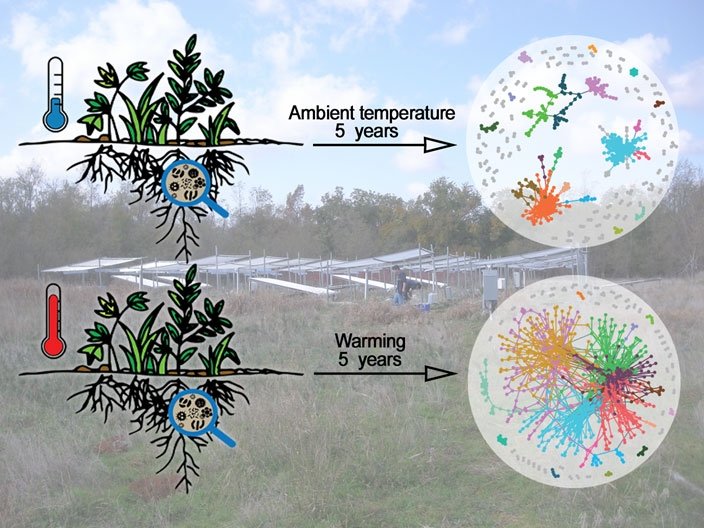 Scientists often think of the way species interact in nature as a web or network. In these networks, points represent species, and the connecting lines indicate their interactions. Ecologists generally expect species networks with many points connected by more lines to be more stable than smaller networks with fewer connections in the face of climate change. However, scientists have not fully studied this pattern in soil microbes. This study used a warming experiment to investigate the network of microbial interactions in soils. The research found that microbes might interact with each other in more complex ways when soil is warmer. This would suggest stronger, more robust networks may develop under some warming conditions in the face of climate change.

Microbiologists do not fully understand the effects of a warming climate on microbes in soils. This study shows that warmer soils might lead to more complex and more stable microbial networks. This could affect ecosystem processes such as how soil communities use oxygen and carbon for respiration, energy, and other needs. The findings also imply that there are important feedback cycles in the soil microbiome under warming conditions, indicating that global carbon cycle models should consider the stability of carbon in soil.

Classical ecological theory proposes that more diverse ecosystems are more resistant to external perturbations due to the functional redundancy of biological interactions in those diverse systems. Any pressure on a specific species-to-species relationship is more likely to affect the behavior of the entire ecosystem if there are fewer functionally similar connections in the interaction network—that is, if fewer species can pick up the slack. Despite the exceedingly high diversity of soil microbiomes, however, scientists have found little evidence supporting a diversity-stability relationship in these communities. This study utilized soil microbial community data from a six-year ecosystem warming experiment conducted in Oklahoma tall grass prairie. Prior studies at this experimental site have suggested that warming will affect plant water use efficiency and the allocation of net primary production to below-ground carbon turnover. Scientists had expected these effects would be mediated by the succession, temporal scaling, and feedback responses of microbial communities to climate change. In this study, analysis of microbiomes under ambient and warmed conditions indicated that warming was also associated with increased soil microbial network complexity, size, and connectivity. Warming appeared to increase the number and size of network modules and the number of keystone nodes. This implies that species networks are more complex and robust under warmed conditions. The functional behavior of soil microbial processes has been notoriously difficult to predict and frequently exhibits high, inherent variability. Here, microbial networks were more strongly correlated with specific ecosystem functions, including gross primary production, respiration, and net ecosystem exchange under warming conditions. The analysis suggests that a warming climate may have a stabilizing impact on microbial variance which, in turn, may affect how ecosystems behave across scales. For example, more resistant soil microbiomes may accelerate microbially driven processes, such as the loss of organic matter from soils. Conversely, many ecosystem functions intertwined with climate behavior may become less vulnerable to perturbations in a warmer world. Overall, these findings suggest that changes in microbial diversity-function relationships need to be considered in efforts to understand the impact of global climate change at larger and longer time and space scales.

This work was supported by the Department of Energy Office of Science, Office of Biological and Environmental Research via grants to Jizhong Zhou.