Insight into charge generation induced by light could enable the design of better photocatalysts made from nanomaterials. 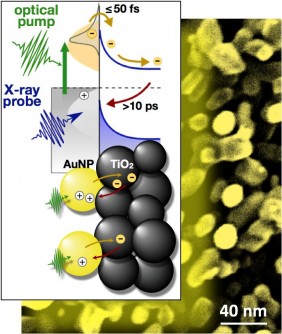 Newswise — Scientists are working to turn sunlight and water into fuel. One promising approach is to use mixtures of tiny nanoparticles, whereby different particles play different roles. For example, tiny gold spheres absorb sunlight well, but they can’t efficiently make fuel by themselves. They need particles of another material nearby. The trick is to transfer electrons produced by the gold donor particles, as they absorb light, to the acceptor particles that start the chemical reaction to produce fuel. A team of scientists has found a way to count how many electrons transfer between the two materials. They can also measure how long the electrons stay in the acceptor particles. This information is crucial to developing more efficient donor-acceptor combinations.

This study demonstrates a new experimental tool that determines the number of electrons transferred between nanoparticles and an underlying material. By allowing scientists to count electrons, this tool helps explain why some materials for converting sunlight and water to fuel do not work as well as hoped. The answer is that previous estimates of the efficiency of electron transfer were probably too high. The ability to quantify electron transfer will help scientists design more efficient materials. These improved materials could one day economically convert sunlight and water into fuel.

To make fuel from sunlight and water, the light needs to be absorbed by a material that releases electrons. The process leaves behind holes in the material. The overall scheme only works well if many pairs of electrons and holes are created and if they last for a long time. Otherwise, the chemical reaction that makes the fuel cannot happen. Gold nanoparticles, spheres thousands of times smaller than the thickness of a hair, can work when attached to a substrate made of titanium dioxide. Electrons in the gold get excited when they are hit by sunlight. This process creates holes in the gold. When transferred to the titanium dioxide, the electrons stay away from the holes much longer than if they remained on the gold. Researchers previously thought that almost every other photon may generate an electron-hole pair. That's not always true. Using time-resolved X-ray photoelectron spectroscopy at the Advanced Light Source, researchers are now able to count the numbers of transferred electrons. They found that only one in 1,000 photons generates an electron-hole pair. It then takes less than a billionth of a second for the electron to come back from the titanium dioxide and recombine with the hole. The study may explain why some devices don't work as well as hoped. It also provides benchmarks for better future designs.