New findings will help extend the lifetime of catalysts used to process bio-oils in liquid systems. 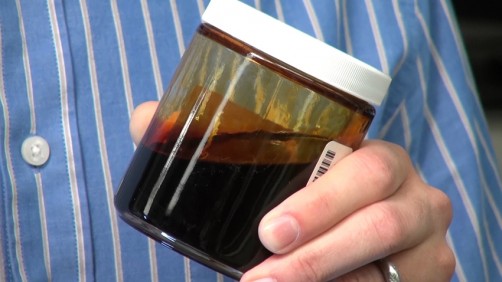 A jar of bio-oil, an alternate “crude oil” for transportation fuels currently made from petroleum, is created by first rapidly heating plant matter in a process called pyrolysis. Scientists then use catalysts to remove oxygen and convert the pyrolysis oil into transportation fuels.

Creating transportation fuels from wood chips, grasses, or other types of biomass remains a significant scientific challenge. One troubling step in the process of turning biomass-derived oils into transportation fuels requires the use of catalysts to remove various oxygen-containing compounds, increasing the energy density and stability of the bio-oils, an alternate “crude oil.” Catalysts are materials that drive reactions but are not consumed by them. Scientists discovered that removing the oxygen and water forms an impurity that decelerates and significantly disrupts the process.

Project findings showed that water affects the reactivity of the catalyst, as well as alcohols and certain acids. While interactions with water are unavoidable, the new information is useful for understanding how to better extend the lifetime of catalysts in the liquid systems needed to process bio-oils.

Various catalysts can be used in the hydrodeoxygenation process, which removes oxygen-containing compounds or oxygenates, but the best catalysts require water. A team of scientists from the Technical University of Munich and Pacific Northwest National Laboratory studied the interactions of specific catalysts with phenol (the simplest type of oxygenate) in the presence of water. Using ab initio molecular dynamics calculations performed on supercomputers at the Environmental Molecular Sciences Laboratory and at the National Energy Research Scientific Computing Center, the research team discovered that water forms an impurity that slows down and significantly disrupts the reactivity of catalysts, alcohols, and acids.

This research was supported by the Office of Basic Energy Sciences, Office of Energy Efficiency and Renewable Energy, Office of Biological and Environmental Research (BER), and National Energy Research Scientific Computing Center (NERSC), all within the U.S. Department of Energy’s (DOE) Office of Science. Work was performed at Pacific Northwest National Laboratory (PNNL), operated for DOE by Battelle Memorial Institute under contract AC0676RLO1830. Computing time was granted by the grand challenge of computational catalysis of the William R. Wiley Environmental Molecular Sciences Laboratory (EMSL). EMSL is a national scientific user facility located at PNNL and sponsored by BER. NERSC is supported by the DOE Office of Science under Contract No. DE-AC02-05CH11231.