Whether carbon comes from leaves or needles affects how fast it decomposes, but where it ends up determines how long it's available. 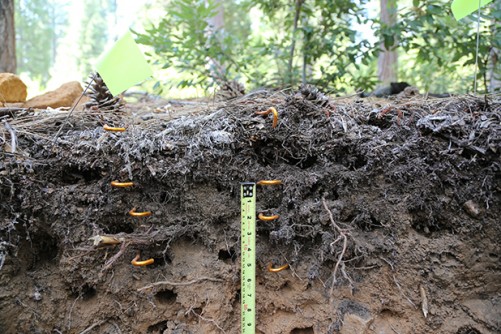 In one of the few such studies, scientists examined how dead leaves, roots, and other plant litter decay over a decade. The team used stable isotope labels to trace plant litter-derived carbon and nitrogen as the litter decomposed and formed soil, specifically the fraction of soil called organic matter, which comes from plant inputs and microscopic animals. They found that the litter type (needles or roots) and the placement in the soil environment both affected decomposition, but at different timescales.

This research helps bridge the gap between studies of how leaves and other plant litter decompose and soil organic matter, which contains decomposed litter and other bio-based materials. The study builds this bridge by tracing how litter becomes soil organic matter over a decade. The results back a paradigm shift in our understanding of soil carbon research. The study does so by demonstrating that the long-term retention of litter-derived carbon and nitrogen in soil depends on where the litter lands.

A team led by scientists at Lawrence Berkeley National Laboratory found that the type of plant inputs (that is, root or needle litter) affected total carbon and nitrogen retention over 10 years, but that soil horizon (essentially, the layer of soil, such as the topsoil organic or deeper mineral layers) affected how the litter-derived soil organic material is stabilized in the long term. In the organic horizon, litter was retained in the coarse particulate size fraction (greater than 2 millimeters) over 10 years, likely due to conditions that limited its physical breakdown. In the mineral horizon, litter-derived carbon and nitrogen were broken down quickly, and retained in a finer size fraction (less than 2 millimeters), likely due to association with minerals that prevent microbes from fully accessing the carbon and nitrogen. Once the organic material was protected by minerals, the original litter source had no further effect on its stabilization. After 10 years, 5 percent of initial carbon and 15 percent of initial nitrogen were retained in organo-mineral associations, which form the most persistent organic matter in soils. Very little litter-derived carbon moved vertically in the soil profile over the decade, but nitrogen was significantly more mobile.

This material is based upon work supported by the U.S. Department of Energy, Office of Science, Office of Biological and Environmental Research, Terrestrial Ecosystem Science program under contract DE-AC02-05CH11231.