Analysis of rates of police-related fatalities finds significant differences between Black and White people, and significant variation across metropolitan areas 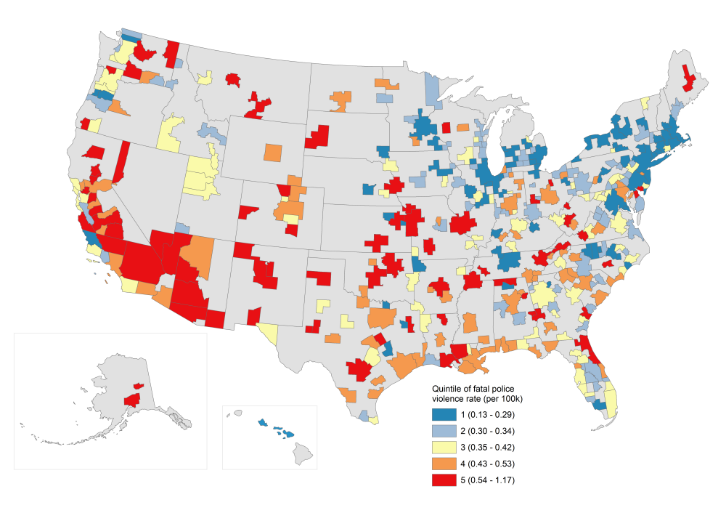 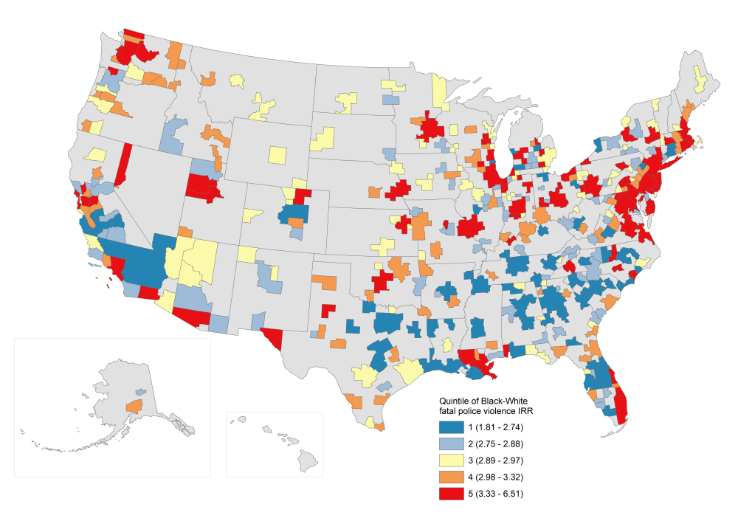 Newswise — A study analyzing and describing US police-involved fatalities across racial/ethnic groups at the level of individual metropolitan statistical areas publishes June 24, 2020 in the open-access journal PLOS ONE, by Gabriel Schwartz and Jaquelyn Jahn from the Harvard T.H. Chan School of Public Health.

In the wake of George Floyd’s death at the hands of the police in Minneapolis and the following surge of protests against police violence, uncovering specific data on police-related fatalities in the US has never been more critical.

In order to estimate rates of fatalities involving police for every metropolitan statistical area (MSA) in the US—a level of geographical precision that surpasses previous work in this area—Schwartz and Jahn analyzed 5,494 police-related fatalities from 2013-2017, using a comprehensive and independently-validated database, Fatal Encounters (endorsed by the federal Bureau of Justice Statistics). The analysis excluded 1,670 cases reported as suicides, accidents, or vehicle collisions; 547 deaths also lacked race/ethnicity data, and so were excluded from the portion of the analysis related to racial/ethnic inequities. While Fatal Encounters offers the most comprehensive data on police use of deadly force in the US at this time, it likely misses a number of similar cases because not all of these incidents are reported. Other limitations with the dataset include a possibility of racial/ethnic misclassification, since race was not self-reported, and a risk of misclassification of cause of death (e.g.: accidental versus non-accidental death). The database also does not include the circumstances around each police-related fatality, and it’s unclear if every fatality in the database would have been prevented had the police not become involved.

The data showed large variation in the number of police-involved fatalities across MSAs generally—rates of fatal police violence were nine times higher in the metro area experiencing the highest rates than the least lethal metro area. Across all groups, fatalities were higher in the West and South than in the northern Midwest and Northeast. The data also shows large inequities in the rates at which White and Black people were killed during police contact. Across all MSAs, Black people were on average 3.23 times more likely to be killed than White people (95% CI: 2.95, 3.54, p < 0.001). The specific rates varied greatly across MSAs: Black fatalities ranged from 1.81 times greater than White fatalities in the Atlanta-Sandy Springs-Roswell MSA, to 6.51 times greater than White fatalities in the Chicago-Naperville-Elgin MSA. In general, MSAs with low rates of police-related fatalities against White people tended to exhibit more extreme Black-White inequities. The authors did not calculate MSA-specific rates for people of other races/ethnicities, including Native American, Middle Eastern and Asian/Pacific Islander, due in part to the low total number of deaths for these groups in the Fatal Encounters database.

Importantly, Schwartz and Jahn compare rates of fatal police use of force to the general population, and not to the number of general police contacts with the population, making it impossible to examine rates of fatal police use of force relative to all police contacts. While this paper is descriptive, and thus does not attempt to draw conclusions about the causes of the observed disparities, the authors suggest that place-specific policies, such as firearm regulations, levels of segregation, differences in police training and police department protocols, may help to explain differences in incidence rates.

The data highlights the fatal impact of disparate police use of force on populations and on public health. More and better data, as well as an awareness of the varying historical contexts across the US at a metropolitan and even at a neighborhood level, will enable researchers to dig further into the reasons behind these described disparities to address the public health issue of police-related fatalities in the US.

The authors add: “People’s risk of fatal police violence varies hugely from one metro area to another; some metros have death rates 9 times those of other cities, which points to how preventable these deaths are and why so many people are protesting police violence across the country.” They conclude: “Nationally, Black people are at much higher risk of being killed by the police, but in some places the difference is truly enormous: Black Chicagoans are more than 650% more likely to be killed than White Chicagoans.”

In your coverage please use this URL to provide access to the freely available article in PLOS ONE:  https://journals.plos.org/plosone/article?id=10.1371/journal.pone.0229686