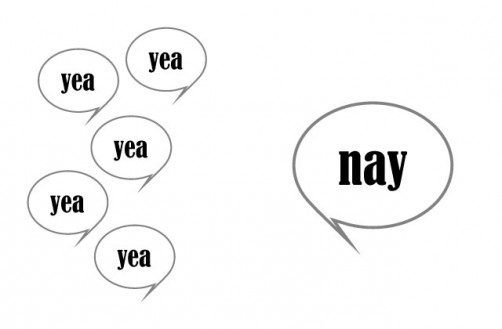 University of Iowa researchers are part of a team that found a single loud voice can skew the result of voice votes, a common decision-making feature in American public life.

Newswise — The louder the voice, the cloudier the choice: So says research led by the University of Iowa, which found that a single loud voice can skew the result of voice votes, a common decision-making feature in American public life.

Voice voting is used at civic, local, and county governmental meetings. It's also employed regularly in Congress (especially the Senate) and in state legislatures to pass resolutions. The format is simple: A presiding officer states a question, and the group that replies either yea or nay the loudest is declared the winner.

But the technique can turn out to be confusing and even produce erroneous results, researchers at the UI and at the National Center for Voice and Speech argue in a paper published this month in the Journal of the Acoustical Society of America.

“All voters should realize that a soft (voiced) vote is basically an abstaining vote and that one loud vote is equivalent to many votes with normal loudness,” says Ingo Titze (pronounced TEET-Zah), professor in the UI’s Department of Communications Sciences and Disorders in the College of Liberal Arts and Sciences and corresponding author on the paper. The researchers calculate it would take at least 40 normal loudness voices to overcome the bias of a single loud vote, in order to establish roughly a two-thirds majority.

Take the 2012 Democratic National Convention, for example (see video footage at https://www.youtube.com/watch?v=kX11IUjkEKs&feature=youtu.be). When Los Angeles Mayor Antonio Villaraigosa asked the several-thousand-member crowd whether the party should reinsert the phrases “God-given talents” and “Jerusalem is and will remain the capital of the State of Israel” into the party’s platform document, the voice vote was so divided that Villaraigosa had to repeat the questions three times before declaring—some say erroneously—that the resolution had passed by a two-thirds margin.

Titze was watching the convention that night. “I’m an acoustician, so the voice vote really perked up my ears," he recalls. "There were very emotional people in that audience. People were literally jumping up and shouting ‘No! No!’ It got me thinking: What good is a voice vote when there’s a real issue at stake—real emotion involved?'”

To find out, Titze and Anil Palaparthi, a research engineer with the National Center for Voice and Speech (NCVS) in Utah, ran a series of experiments simulating various voice-vote scenarios.

The researchers assembled 54 student "voters" in a spacious classroom, with five "judges" positioned at the front, closing their eyes when judging loudness. The student voters were divided into two camps—ayes and nays —and then instructed to shift their numbers and the loudness of their voices, to simulate various voice-vote scenarios. The judges said which group they thought sounded louder after each scenario.

In one scenario, for example, ten voters progressively shifted their voices from one voting bloc to the other, until they had a two-thirds majority. The judges had to determine based on sound alone when that threshold had been reached. (Listen to the audio here: http://clas.uiowa.edu/files/clas/external-relations/E2.wav)

The researchers arrived at several conclusions. When more voices joined a group, the judges noticed an increase in loudness beginning with the second added voice. When voters progressively raised the volume of their voices, judges noticed the increase beginning with only one voter speaking more loudly than the others. This means, Titze explains, that “in a small group, a single voter can skew a two-thirds majority by simply speaking louder than the other voters. And unless individual loudness is controlled, any voice vote for a simple majority is highly suspect.”

The researchers propose locating voters at equal distance from the vote tabulator or controlling for sound on voters’ microphones. Another approach would be to ask everyone to keep their voices at a conversational level.

Still, “there’s something to be said about hearing people’s emotions when an issue comes before them," says Titze, who’s also executive director at the NCVS. "Voice voting may not be useful to make a final decision, but at least it gives people the chance to express themselves verbally, and there’s some value in that.”