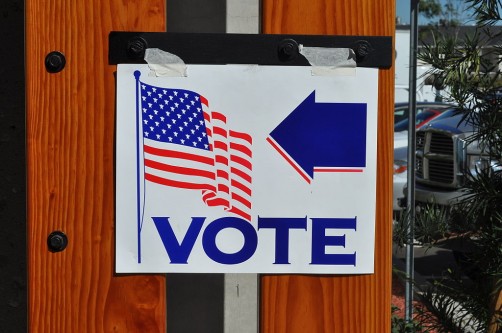 Patrick Miller, assistant professor of political science at the University of Kansas, is co-author of a study (http://bit.ly/2q4Mv3g) on why most average Republicans and Democrats have not accepted the argument that voter ID laws can suppress votes, despite partisanship surrounding the issues among political leaders.

Newswise — LAWRENCE — Most Americans — even average Democrats — do not accept the argument that voter identification laws can suppress voter turnout, according to a new study that includes a University of Kansas professor.

The findings can help illuminate why polarization surrounding voter ID laws occurs mostly among party leaders but has not trickled down much to the public, even among groups of Americans like racial minorities, the young, and the low income who are most likely to be affected by voter ID laws, said Patrick Miller a KU assistant professor of political science.

Miller's study with co-author Pamela Johnston Conover, distinguished professor of political science at The University of North Carolina at Chapel Hill, was published recently in the journal Social Science Quarterly.

It is among the first research examining how voters think about voter ID laws, which has been a hot topic for the past decade in several states. A recent federal court decision found a North Carolina law — that required voters to show ID but rejected forms most commonly used by African Americans — was unconstitutional. President Donald Trump has repeated a claim several times that "millions" of noncitizens voted illegally in the 2016 election and appointed an advisory commission that includes Kansas Secretary of State Kris Kobach to examine the issue.

Miller said separate from this study, other researchers have found that voter fraud occurs very rarely and if it does, is often due to clerical error and not malicious intent. However, much of the public believes voter fraud is a widespread problem and that voter ID laws are a potential solution.

The online survey conducted in October 2014 included 1,040 American adults as a reasonable representation of the U.S. population. Generally, Republicans and most Democrats in the survey considered voter fraud a moderate or widespread problem, believed voter suppression is not likely, and supported voter ID laws. The only Democrats who were opposed to voter ID laws were those who believed both that voter fraud is nonexistent and that voter ID laws were highly likely to suppress voter turnout.

"It's not very surprising in our study that the opinions of average Republicans mimic what elected Republicans are saying," Miller said. "It's really Democrats who are the interesting ones. They don't mimic their party leaders. They think voter fraud is a serious problem and is affecting the outcome of elections. They think voter impersonation is common, for example, and that non-citizens are regularly voting in our elections. They have completely, in that sense, adopted the Republican argument, but also importantly, they have rejected their own party's frame."

African Americans, Latinos, young voters, senior citizens, and the poor are typically the most vulnerable to strict voter ID laws because they tend to disproportionately not have a government-issued photo ID and tend to have the greatest difficulty obtaining that identification. However, Miller said, Americans in those subgroups also overwhelmingly support voter ID laws, believe that voter fraud is widespread, and reject the notion that voter ID suppresses turnout.

That means most Americans have accepted the way in which Republican leaders talk about the issue, especially that voter fraud is a major problem, Miller said. Democratic leaders have sought to frame it as a moral issue and that voter ID can infringe upon people's voting rights.

"Average Democrats have not followed along," Miller said. "They are not seeing this as a moral issue in the way that Republicans are."

Potentially, the simplicity of the Republican argument that voter fraud is a problem and voter ID is the remedy could be the key to its success, he said. For one, it taps into most people's negative attitude about politics.

"Americans are very negative, distrusting, and cynical about the political process. We don't like politicians. We don't feel very efficacious toward them, and we feel that the process is corrupt and that people don't have a voice," Miller said.

Secondly, most Americans are accustomed to showing identification in all kinds of situations. Most people also have a government-issued ID, usually a driver's license.

"I think for most people, including most people in the most vulnerable groups, they really can't connect with the reality of some voters that they don't have a government-issued ID and might have a hard time obtaining one," he said. "They just don't understand that reality. And that lack of empathy is true across partisan, racial, age, and economic lines."