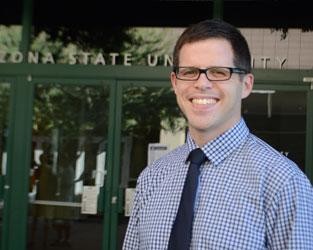 Newswise — It used to be that the most controversial issue at an NFL game was a ref’s call or a late hit on a quarterback. These days it’s politics and violence (on field and off), concussions and the risk of brain damage, and taking a knee during the national anthem. Each of these issues are testing the mettle and mindset of millions of sports fans. What happened to the game itself? And is pro football, considered the nation’s most popular sport, heading for decline? For answers, we turned to Emmy-winning producer Brett Kurland, who is the director of the Phoenix Sports Bureau of Cronkite News and a professor of practice at ASU’s Walter Cronkite School of Journalism and Mass Communication.

Question: The last days have seen the President criticizing the NFL and its players, as well as NFL owners and players pushing back. Do you see a lingering affect throughout this season? Do you anticipate a longer-term affect from this conflict?

Answer: When people involved in sports discuss issues away from the field of play, a refrain from some fans has been some form of “Stay in your lane and stick to sports.” I think we are now at a point where “sticking to sports” is permanently a thing of the past. With the combination of the ever-increasing popularity of athletes and the direct-to-fan platforms they now have, and with everything from Twitter to The Players Tribune, athletes have the capability to draw significant attention to issues that people might not otherwise follow.

In terms of longevity, it’s always hard to predict the narrative at the rate the news cycle turns nowadays. President Trump has been tweeting about the anthem protests, the news networks have been running story after story about it. But I’m curious to see how it plays out in other sports. For example, in baseball the national anthem historically has always been a spectacle at the World Series, with major recording artists brought singing before each game. What’s that going to look like? How does this develop? Will it have a lingering effect? I’m not really sure.

Q: This follows a growing body of evidence detailing the risks of brain injury and the long-term consequences of concussions and other injuries. Do you expect this will decrease support for the sport, both from participants and fans?

A: If you look at youth tackle football participation, those numbers are down. If fewer young kids are playing football now, what happens when that generation comes of age to play the sport at the collegiate and NFL levels? What will the talent level be like? What will it look like in 10 to 15 years? I believe the rules will continue to evolve as the league continues to develop more ways to protect players. But how will that change the game in the long run? When my kids are my age, what’s the sport going to look like? It’s a big question. Remember, there was a time when boxing and horse racing were among the big sports in this country. So will the NFL be on top forever? There are no guarantees, but it’s still very successful now.

Q: Is this part of an evolving trajectory in which football faces declining viewership—or will the impact be more fleeting?

A: The top-rated program on television by far each year is the Super Bowl. It is a cultural event. That said, football definitely has some challenges, first and foremost being the headlines surrounding chronic traumatic encephalopathy (CTE) and concussions. In a study released over the summer, 99 percent of the brains of deceased NFL players that were donated for research were found to have CTE. Just last week the news came out that Aaron Hernandez, the former New England Patriot who was convicted of murder and committed suicide while in prison, had severe CTE. He was young – only 27 – and he had only played in the NFL for three years. I think that’s a big wakeup call for a lot of young people.

Q: How quickly do you expect to see a shift? Will it affect all levels, starting with youth leagues and high school football?

A: There already has been a shift in youth participation. High school participation is down as well. A recent study showed that kids who started playing tackle football before the age of 12 are more likely to develop cognitive and behavioral problems than kids who start later. The big question is, what does it all mean? If participation is down and there’s evidence of brain injuries as a result of football, how does the sport evolve and stem the tide? The NFL by and large is still incredibly popular. NFL teams usually sell out their stadiums. Football regularly pulls in big ratings. I think it’s a longer arc. I don’t see it fading anytime soon.