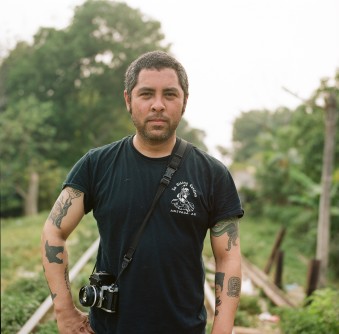 University of Michigan Anthropology Professor Jason De León on the tracks of “The Beast” the freight train many migrants use to cross Mexico on their way to the US-Mexico border.

Jason De Leon, assistant professor of anthropology, has spent years studying the lives of illegal migrants crossing the U.S.-Mexican border, and more recently the southern Mexican-Guatemalan border. He is the author of "The Land of Open Graves: Living and Dying on the Migrant Trail."

Check out this video of his work in southern Mexico: https://youtu.be/ILRaLNjhc0w
"The recent executive order on immigration and border enforcement reflects both a failure of the current administration to understand the realities of how we police our southern political boundary and giant leap away from any type of reasonable approach to immigration reform," he said. "Years of research and investigative journalism have demonstrated that many of these proposals are either impossible, dangerous, and/or destined to fail. An increase in immigration detention centers has been shown to be a new way to pad the pockets of private contractors who are moving away from the unpopular prison-industrial complex towards the immigration-detention industry.

"This increase in private detention centers is also directly linked to numerous human rights violations, which would only get worse should we increase construction rates of these facilities. Expanding the border patrol seems odd given that this administration has recently called for a federal hiring freeze. Moreover, given the rigorous vetting required to join the border patrol, it is unlikely that any type of hiring surge would be possible at this point.

"Finally, the construction of a wall would be prohibitively expensive, a logistical nightmare to maintain, a disaster for the natural environment, and a project subject to numerous legal appeals by environmental groups, Native Americans who live along the border, and various other agencies and groups. More importantly, decades of research have clearly shown that a wall along the border would function as nothing other than an overpriced monument to xenophobia and a failure to understand how border security works."