Newswise — WASHINGTON, June 22, 2021 /PRNewswire/ -- Amplify Publishing announces the release of Beyond Fear: How I Fought the Feds for Six Years—and Won by Ted Giovanis. 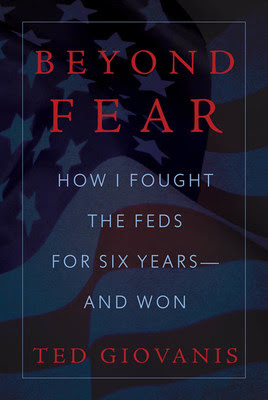 Healthcare and policy professional Ted Giovanis tells all in his gripping memoir, Beyond Fear. One man's story of how he—a self-employed healthcare finance and regulatory consultant—overcame extraordinary odds in his battle with the federal government, culminating in one of the largest court settlements in the history of Medicare.

Ted Giovanis, FHFMA, MBA, is president and founder of the Jayne Koskinas Ted Giovanis Foundation for Health and Policy. His memoir provides a blueprint for how concerned citizens can seek to remedy federal transgressions while also showcasing the ways in which career bureaucrats can and often do shape public policy. Beyond Fear is a surprisingly personal story of intrigue, hard work, and ultimately reward.

On May 3, 2006, Ted Giovanis emailed a U.S. government official, seeking clarity on an arcane issue: the calculation used by Medicare to determine reimbursement rates for certain kinds of hospitals. Though he expected a routine exchange, what unfolded was anything but. Buried in the official's response was a piece of information that marked the start of a six-year odyssey that led Giovanis to sue the U.S. Department of Health and Human Services on behalf of 730 hospitals. The U.S. Court of Appeals eventually ruled unanimously in Giovanis's favor, and the federal government paid out approximately $3 billion to hospitals.

Kirkus Reviews calls Beyond Fear "a well-written story on a niche topic for an audience of non-specialists and a compelling look at modern governance. A solid account of a battle between government and industry."

"Ted Giovanis refutes the old saw that 'you can't fight city hall'. It's a story that will inspire you, infuriate you, make you laugh, and even make you cry." —Charles J. Pendola, founder, former CEO, and president of Preferred Health Network; author of Hospital Budgeting: A Case Study Approach

Beyond Fear  is available everywhere books are sold.