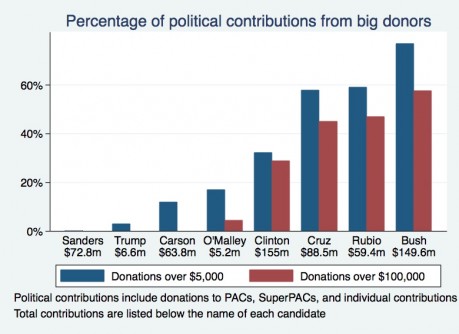 Newswise — As the 2016 presidential campaign attracts more money and bigger political donations than any campaign in U.S. history, the University of Chicago Booth School of Business has created a financial index to capture the influence that corporations and special interest groups have on politics and the economy.

The George J. Stigler Center for the Study of the Economy and the State at Chicago Booth launched the Campaign Financing Capture Index to measure the concentration of campaign funding in the 2016 U.S. presidential election. The index ranks the concentration of funding for each candidate with an eye toward predicting how political donations could influence policy decisions under a new president.

The creation of the index comes as the U.S. courts have lifted limits on the size of political donations, and special interest groups, in the form of super PACS, are playing a bigger role in how campaigns are financed.

“The more concentrated the sources of funding to a political campaign, the higher the risk a politician will be influenced by special interests,” said Professor Luigi Zingales, director of the Stigler Center. “Candidates receiving large donations from few donors may be less willing and able to lead reforms in markets where powerful special interest groups benefit from the status quo.”

The Campaign Financing Capture Index, published quarterly, will track when and how big-money political donations shift during the course of the campaign. Researchers at the Stigler Center expect there to be significant changes in the concentration of donations as the race progresses.

The index measures “concentration” by the number of donors and the amount of each donation. Candidates with highly concentrated funding have the fewest donors giving the most amount of money. Candidates with low concentration of funding have the largest number of donors giving the smallest amounts of money. The Stigler Center defines large donations as contribution of $5,000 or more.“We think that when donations start to exceed $5,000, donors are not just expressing a political preference, they are trying to influence future policies,” said Zingales.

First Round of Results

The candidates ranked in the same order when tracking donations of $100,000 or more. Bush had the highest concentration of $100,000-plus donors at 58 percent, followed by Rubio at 47 percent, Cruz at 45 percent, Clinton at 29 percent, and O’Malley at 4.3 percent. Figures for Carson were inconclusive.

Sanders and Trump are the only candidates to have received no political contributions over $100,000. Sanders’ campaign is dominated by individual donations of $200 or less. Trump is in a category of his own, digging into his own pockets to fund much of his campaign.

The funding results are for the campaigns are through Dec. 31, 2015.

Analysis is based on Federal Election Commission data collected by the Center for Responsive Politics, a nonprofit, nonpartisan research group. The Stigler Center is a nonpartisan, academic research institution that is focused on the creation and dissemination of research on competitive markets, regulatory capture and the ways in which special interest groups distort markets.

The Campaign Financing Capture Index is led by Professor Luigi Zingales, along with the University of Chicago’s Milena Ang and Chicago Booth’s Eran Lewis.