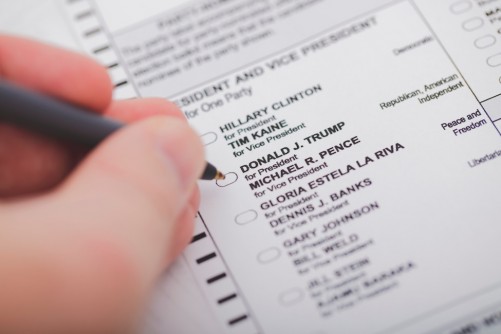 While researchers cautiously suggest that charisma may indeed “trump” narcissism, the results also suggest when voters attribute charisma to a candidate and also believe that they share similar values, this may allow voters to more fully embrace the candidate.

Newswise — Narcissism is common among U.S. presidents and is often associated with negative outcomes for former presidents such as Lyndon B. Johnson, Richard Nixon and Bill Clinton. However, narcissists with charisma can also attract voters, inspiring them with a call to action, a grand vision and their own personal charisma.

A new study by faculty at Florida Atlantic University suggests those positive qualities, as perceived by voters, may have helped push U.S. President Donald Trump to victory in the 2016 presidential race with Hillary Clinton.

“What we find in the 2016 presidential election is charisma appears to counterbalance the negative effects of a narcissistic personality in people’s perceptions of a leader and going ahead and voting for that person,” said Ethlyn Williams, Ph.D., associate professor of management in FAU’s College of Business, who coauthored the study with faculty from California State University San Marcos, Nova Southeastern University and the University of Sydney. The study is published in the journal Personality and Individual Differences.

Williams and her co-authors examined results of surveys administered two weeks before and one week after the 2016 election. It was completed by 426 participants who answered questions on leadership and leader evaluations for both Trump and Clinton. Results from the study suggest that narcissism and attributed charisma are both important predictors of voter choice and found that attributed charisma may serve as a balance to narcissism. Thus, followers of a candidate potentially look beyond negative leadership qualities to select those leaders who they perceive to have redeeming positive attributes and values.

While the researchers cautiously suggest that charisma may indeed “trump” narcissism, the results also suggest when voters attribute charisma to a candidate and also believe that they share similar values, this may allow voters to more fully embrace the candidate.

Exhaustive media coverage of candidates for more than two years ahead of the election, as well as skillfully woven narratives from the candidates about their own lives, provides voters with the perception of familiarity with candidates' traits, the study noted. With the power of modern social media, this effect can be amplified.

While Trump’s narcissism and charisma translate as “appearing strong” to his supporters, Williams noted, future research is needed to look into how voters perceive his narcissistic qualities over time in terms of his performance as president.

“That long-term effect, what people feel they're getting from the leader over time, will determine how they judge the leader,” Williams said. “So, we're not there yet, but our early research suggests that those people who view Trump as being self-serving will evaluate his performance more negatively. While people who view him as doing good things for the country will view him more positively; and that's human nature.”