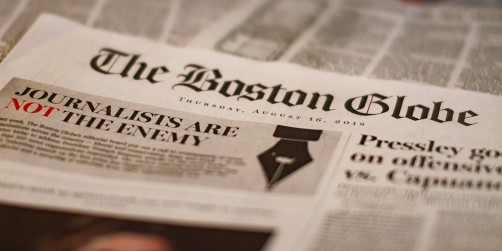 Newswise — The current administration has a documented adversarial relationship with the media—frequently referring to the reporting of many outlets as “fake news” and calling the press the “enemy of the people.” While 65 percent of voters believe media is an important part of a democracy, according to a new Quinnipiac University poll, there is a clear partisan division on the importance, actions, and role of a free press.

To remind citizens of the value of America’s press, the Boston Globe’s Marjorie Pritchard, deputy managing editor for the editorial page, set out to engage with media across the country. She encouraged her colleagues at other media outlets to post editorials on August 16, “on the dangers of the administration’s assault on the press and ask others to commit to publishing their own editorials on the same date,” Pritchard wrote in a memo. The Radio Television Digital News Association joined in support, and hundreds of outlets—from large dailies to weekly regional papers, and from broadcast to online outlets—signed on to run pieces in solidarity.

Jennifer Chudy, assistant professor of political science at Wellesley, studies American politics with an emphasis on race and ethnicity, public opinion, and political psychology. She shares some thoughts on the role of the media:

Q: The administration has often disparaged not just stories critical of its policies and actions, but also stories on issues of immigration, racial tensions across the country, and underrepresented communities. Why is it important that the press has the ability to report on these topics?

Jennifer Chudy: It is important that the media covers topics such as race and immigration because the country is so highly residentially segregated. People tend to live with people who are the same races and of similar incomes to them. Sometimes, the media is the only vehicle by which we can learn about problems and issues in these communities.

That’s not to say that any and all media attention is inherently beneficial. The press has not always done a great job highlighting these problems or portraying them in a sensitive way. I want to stress that we rely on the media to frame things accurately and report critically.

For example, research in political science has shown that a majority of white Americans think that the majority of people on welfare are African American. This is factually incorrect, but when media choose to run a picture of an African American with a story about welfare, that has the power to unwittingly frame people’s perceptions and reinforce false narratives.

We need media content that is full and critical because knowledge and engagement are precursors to wanting to address and solve problems through policy action, voting, or volunteering. Learning about the treatment of certain communities can expose pernicious forces like prejudice and inequality—like the unequal access to clean water in Flint, Mich., for example. If you don’t know that a problem exists, you’re not going to want to take action to fix it. Media has an important role to play, but I want to underscore that the media itself is not neutral, and attention is not necessarily always beneficial.

Q: Can this widespread effort of editorial boards joining forces across the nation change American minds about the effectiveness and importance of a free press?

Chudy: When we think about the collective action to publish editorials today by the media, I think it will resonate with Democrats, but I don’t think Republicans will be moved. In many cases, Republicans are already not following many of the outlets participating.

Right now, the press is highly polarized and partisan, so it is hard to think of it as a total entity. There are both liberal and conservative press outlets, and very few that are drawing a bipartisan audience, in my opinion. This certainly seems like an unusual and unprecedented act of solidarity by the media, especially when you consider the competitiveness in the industry across our country and regionally. That they’ve bonded together like this shows how deeply this president has impacted them as an institution.

But when it comes down to it, people see legitimacy in media outlets that align with their political beliefs. Followers and readers are already on board—or not on board—with a given outlet politically.

As a private citizen, I think the attack on the press is certainly worrisome, and I understand the significance of editorial boards joining forces. As a political scientist, I am skeptical that this action will shift things. Opinions about the press as an institution fluctuate a lot based on who is in office. Right now, Democrats want the press to be a watchdog, and Republicans do not.

Q: A recent Quinnipiac poll also found that more than half of American voters say that “President Trump has emboldened people who hold racist beliefs to express those beliefs publicly.” What can news outlets do to combat this?

Chudy: We might like to think of journalism or journalists as totally objective, but it is important to remember that a reporter is always putting his or her frame on a story.

One thing that news outlets can do, with respect to the example of racist beliefs in particular, is not only to report that these beliefs exist, but also to provide a sense of the context: How widespread are these beliefs? Are they similar to beliefs espoused in earlier eras? Are they linked to certain movements or organizations? Are they more likely to be applied to some groups and not to others? More generally, we need a greater emphasis on the context—for example, not just reporting on an event or movement, but emphasizing that the movement emerges from XYZ, is aligned with other movements such as ABC. Critical context gives the reader a greater sense of the scope or existence of a problem, without which you are less able to do anything to solve or combat it.

It is incumbent on the media to display what is going on, and to also provide that critical context. Give us the sense of the significance; good journalism provides the reader with more than the who, what, where, and when. It is also giving you a sense of why it is newsworthy.

Q: What role does the president and the government want or expect the press to serve?

Chudy: The president is not like those in the past who have in many cases relied on media to garner public support for their policies and increase awareness of them, like with President Obama and the Affordable Care Act, for example. President Obama did a press tour to engage with the public ahead of the vote on the legislation, to reach as many people as he could and attract supporters. He wanted to, and needed to, invite the press in. We see a very different, and in many cases shocking, approach by President Trump. We’ve seen with Trump’s behavior that he rejects this technique—maybe it’s because he’s so adept at Twitter.

And we need to consider that the kind of reporting I’m talking about—with rich and sensitive context and a critical eye—was largely absent during President Trump’s ascension through the Republican primary and his eventual election. Candidate Trump received a lot of attention because he was an irresistible story. He really relied on the press on the campaign trail, and at that point it was indeed a tool or an instrument. Nowadays, the president has a direct mouthpiece to the people via Twitter.

As political scientists, we have no framework or comparison here, because President Trump is a very different president and Twitter is a very different form of communication. Presidents in the past often observed significant protocol and consideration when airing opinions or introducing policy—in general and on social media. But there is no standard, and while we see other leaders around the world also using social media as a platform, President Trump is unique.

When we consider how the president’s tweets themselves are news, one thing the press could do to provide that additional context is to use the volume of tweets he has amassed at this point to shed further light on his behavior and policy implications. For example, does he tweet about policy after something happens with the economy, does he tend to tweet about race after some racial incidents and not others? Can any sort of pattern be detected? That would be interesting.

And today, he’ll probably send out a tweet about how all the media have ganged up against him. Ultimately, for some this may just further solidify that they’re “out to get him.”