Why Are Some Presidential Remarks More Memorable Than Others? 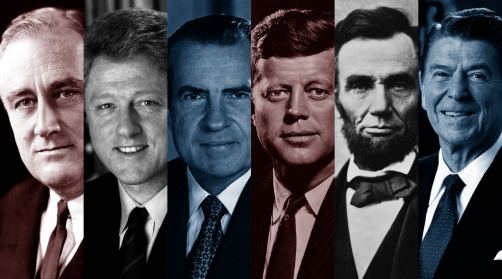 It seems that for every “Four score and seven years ago…” speech, there are countless others that go uncelebrated and disappear from the pages of America’s history. We wanted to find out why. So, in honor of President’s Day, the college sat down with presidential rhetoric expert Leroy G. Dorsey to figure out why some messages stand the test of time and others don’t.

“I’ve always been interested in how our society constructs its identity,” he said. “So I analyze the stories and the myths that the presidents tell in trying to construct who we are as people.  What presidents say, and how they say it, gives us guidance for what our culture considers important.”

So what makes for a memorable remark? Turns out, there’s three ways for presidents to ensure their words will live on long after them. Such as…

When Franklin Roosevelt became president during the Great Depression, in his inaugural address he told his fellow Americans that the only thing they had to fear was fear itself. Later, in his 1961 inaugural address, John F. Kennedy said,  “Ask not what your country can do for you. Ask what you can do for your country.” These are examples of binary choices that  parallel opposing ideas; they provide people simple options that are easy to remember and to embrace.

“These presidents are giving audiences an either/or choice, but strategically, there’s only one right answer if you’re an American,” Dorsey said. “At least, that’s the implication.”

Some of the most memorable quotes from presidents aren’t necessarily flattering. When Richard Nixon said “I am not a crook,” or when Bill Clinton said “I did not have sexual relations with that woman,” they were saying something publicly that no other president said before.

“These statements are memorable because other presidents hadn’t gotten themselves into a position to be asked these questions,” Dorsey said. “So it was startling in the fact that they had to answer such personal questions, but in the process, they were also telling us the type of character that was important.”

Sometimes, presidents say things that are just downright poetic. For example, Abraham Lincoln stated at Gettysburg, “[W]e here highly resolve that these dead shall not have died in vain — that this nation, under God, shall have a new birth of freedom — and that government of the people, by the people, for the people, shall not perish from the earth.” Over a century later  Ronald Reagan stated at a different solemn occasion, “The crew of the space shuttle Challenger honored us by the manner in which they lived their lives. We will never forget them, nor the last time we saw them, this morning, as they prepared for their journey and waved goodbye and ‘slipped the surly bonds of earth’ to ‘touch the face of God.’”

“There’s this concept that presidents have to enchant the soul to activate voters’ behavior, and they do that with lofty eloquence that connects individuals to something greater than themselves,” Dorsey said.