“Antifreeze” Molecules May Stop and Reverse Damage from Brain Injuries

21-Jun-2018 1:05 PM EDT, by Perelman School of Medicine at the University of Pennsylvania contact patient services 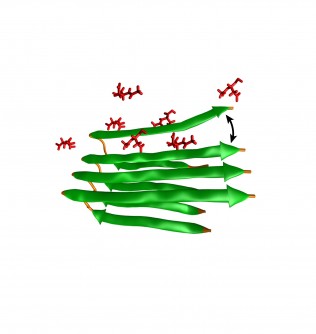 Newswise — PHILADELPHIA – The key to better treatments for brain injuries and disease may lie in the molecules charged with preventing the clumping of specific proteins associated with cognitive decline and other neurological problems, researchers from the Perelman School of Medicine at the University of Pennsylvania report in a new study published in Neurobiology of Disease.

Concentrations of these brain molecules – called N-acetylaspartate (NAA) – are known to decrease when people suffer from brain injuries and diseases. While NAA has historically been used as a marker of disease, its primary role in the brain has remained a mystery. Now, Penn neuroscience researchers have shown how NAA wedges in between the folds of amyloid-beta fibrils to inhibit them from locking, folding, and clumping together to create harmful amyloid plaques.

“For decades, NAA has been viewed as simply a marker of injury when in fact it could be a part of the rescue process,” said senior author Douglas H. Smith, MD, director of the Center for Brain Injury and Repair and professor of Neurosurgery in Penn’s Perelman School of Medicine. “We found that it’s a type of brain ‘antifreeze’ that works to pause and even reverse the aggregation or misfolding of amyloid-beta proteins, which occurs after a brain injury. In this way, it may protect the brain.”

NAA is one of the most abundant amino acids in the brain, and has the highest concentration in neurons. After a traumatic brain injury (TBI), scans from proton magnetic resonance spectroscopy consistently show an approximately 20 percent reduction in NAA in patients’ white matter, the authors note. This is followed by the rapid clumping of amyloid-beta proteins to form amyloid plaques, which are found in a large number of TBI patients who die shortly after injury—similar to the hallmark pathology of Alzheimer’s disease.

A number of strategies to reduce amyloid-beta aggregation, such as immunotherapy and beta secretase inhibitors, have been attempted over the years, but none of them have proved to be clinically successful.  This new study suggests that restoring NAA to normal levels after head trauma or in neurological diseases, like Alzheimer’s, could block the progression of amyloid pathologies.

Using human amyloid-beta samples in the lab, the team demonstrated that concentrations of NAA substantially impaired amyloid-beta clumping. Its possible NAA is creating “peptide backbones,” the authors said—the NAA inserts itself between layers of amyloid-beta clumps and protofibrils, preventing the formation of mature amyloid fibrils. The researchers used several different techniques to determine NAA’s role, including Thioflavin T dye fluorescence, which is used regularly to quantify the formation and inhibition of amyloids.

Electron microscopy also confirmed the absence of mature fibrils following the NAA treatment. The NAA may be stabilizing the smaller fibrils and preventing further organization into elongated, more mature ones, the authors speculated.

The researchers also showed that the addition of NAA can even reverse the clumping. After 25 minutes, NAA added to the amyloid-beta aggregation started to break down the pre-formed amyloid fibrils. This work may have important implications for the treatment of TBI and neurodegenerative disorders.

“We show a new and potentially significant biological function of NAA in the brain, as a surprisingly effective agent for inhibiting and even reversing aggregation of amyloid-beta,” said lead author Jean-Pierre Dollé, PhD, of the Penn Center for Brain Injury and Repair. “This tells us a lot about brain injury and neurodegeneration, and points us to possible therapies to stop it. These findings support the start of a new line of research to reveal potential mechanisms of NAA interactions with amyloid-beta in patients.”