The University of Washington took an ambitious step today to assert its leadership in computer science education, research and entrepreneurial innovation with the establishment of the Paul G. Allen School of Computer Science & Engineering. The Board of Regents voted Thursday to name the school after Allen — the internationally renowned entrepreneur, philanthropist and computing pioneer — in recognition of his longstanding support for the mission of the University and CSE. A $50 million endowment for the new school will propel the UW to the forefront of computer science education and innovation for generations to come. 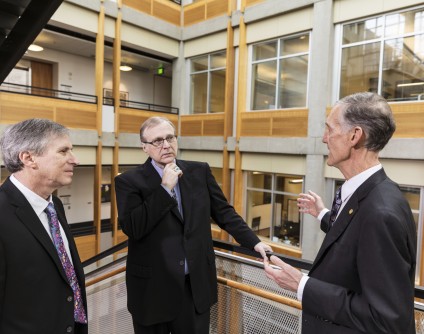 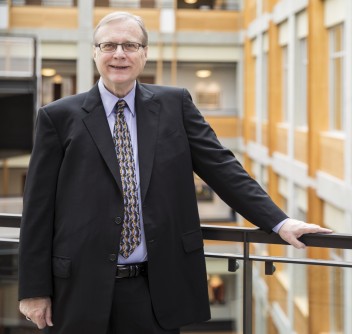 The University of Washington has established the Paul G. Allen School of Computer Science & Engineering, in recognition of Allen’s longstanding support of CSE and the UW.

$50M endowment establishes the Paul G. Allen School of Computer Science & Engineering at the University of Washington Newswise — The University of Washington took an ambitious step today to assert its leadership in computer science education, research and entrepreneurial innovation with the establishment of the Paul G. Allen School of Computer Science & Engineering. The Board of Regents voted Thursday to name the school after Allen — the internationally renowned entrepreneur, philanthropist and computing pioneer — in recognition of his longstanding support for the mission of the University and CSE. A $50 million endowment for the new school will propel the UW to the forefront of computer science education and innovation for generations to come.

“There’s probably no institution that has had a greater influence on me than the University of Washington. I spent hour after hour in the University library devouring everything I could on the latest advances in computer science. And it was access to UW computers as a high school student that served as a springboard for the eventual launch of Microsoft,” Allen said. “So it is a great honor to have the school of computer science and engineering named after me. We are entering a new golden age of innovation in computer science, and UW students and faculty will be at its leading edge. My hope is that the school will have the same influence on them as it did on me — that they will continue to dream big, breaking through technological barriers and using their skills to solve some of the biggest problems our world faces.”

The move to elevate CSE from a department to a school signifies its growing size, stature and impact, and acknowledges the increasing importance of computer science in the modern university and in the modern world. By naming the school after Allen, the UW is linking in perpetuity its top-tier computer science program with a visionary renowned for game-changing innovation.

“We have a deep commitment to both access and excellence. We want our doors to be open to the full range of visionaries, and we want to help them become the best in their fields so that they can have a positive impact on our world,” UW President Ana Mari Cauce said. “We’re truly fortunate to have such a generous supporter in Paul Allen, who not only shares our commitment to fostering broad-based excellence, but who has demonstrated it throughout his career. We’re honored to name our new School of Computer Science & Engineering for such a forward-thinking, steadfast supporter of our University and our region.”

The creation of the school is also a tribute to Allen’s vision of the role that science should play in society, by coupling technological innovation with the quest for solutions to humankind’s greatest challenges. This vision led him to establish the Allen Institutes for Artificial Intelligence, Brain Science and Cell Science. These leading-edge research institutes have opened new frontiers of discovery and new collaborations with UW faculty and students.

The $50 million endowment for the school comes in the form of $40 million from Allen, enhanced by a gift of $10 million from Microsoft Corporation in Allen’s honor.

“When Paul Allen and Bill Gates founded Microsoft in 1975 with a vision of a computer on every desk and in every home, they ignited what would become the modern-day software industry. While much has changed in the past 40 years, one ideal endures: computer science education is a gateway to progress, innovation and opportunity. We are delighted to honor Paul’s tremendous impact on our company, and his continuing support for computer science will have a lasting impact on generations to come,” said Brad Smith, president of Microsoft. With his latest gift, Allen attains the rank of Regental Laureate, an honor reserved for those whose lifetime giving to the UW totals $100 million or more.

Allen has a longstanding connection to and affinity for UW CSE. As a student at Seattle’s Lakeside School in the late 1960s, Allen would visit the UW campus to access the leading-edge computers of the day. Just over three decades later, in 2003, doors would open to the state-of-the-art Paul G. Allen Center for Computer Science & Engineering at the heart of the UW campus, which catalyzed UW CSE’s growth into one of the top computer-science programs in the nation. CSE has risen to prominence by generating innovations with global impact and by advancing leading-edge research in emerging areas of the field:

Mobile health: UW researchers are leveraging increasingly sophisticated sensors in smartphones to diagnose and manage disease in ways that will improve the quality of life for people around the world.

Neural engineering: UW is at the forefront of groundbreaking research at the intersection of computing and neuroscience — developing novel brain-computer interfaces that could enable people suffering from paralysis to move again.

Artificial intelligence: UW has developed formidable expertise in one of the most exciting and dynamic areas of the field, spanning artificial intelligence, computer vision, machine learning, natural language processing and robotics. Several UW researchers split their time with other leading AI organizations, including the Allen Institute for Artificial Intelligence.

Next-generation data storage: UW and Microsoft Research have launched an ambitious project to revolutionize data storage based on DNA. Last year the team set a world record for the amount of digital data encoded and retrieved using strands of synthetic DNA.

Data science: UW is a leader in the data science revolution, advancing the tools and techniques of data-intensive discovery and putting them to work in the physical sciences, life sciences, environmental sciences and social sciences.

As the Allen School, UW CSE will have the flexibility and resources to build on these successes and compete at the highest level for faculty, students and new investments in research — aggressively pursuing new opportunities to accelerate discovery and real-world impact. The school will provide a creative springboard for young innovators to boldly drive forward technologies that change the world for the better, inspired by the example set by Allen himself.

“In becoming the Paul G. Allen School of Computer Science & Engineering, we will be forever linked with an internationally revered pioneer and visionary — an ‘idea man’ who left an indelible mark on science, on technology, on the Pacific Northwest and on the world,” said Ed Lazowska, Bill & Melinda Gates Chair in Computer Science & Engineering at the UW. “The aspirational and reputational value of this connection is incalculable. Thanks to him, CSE will be more nimble, more competitive and have an even greater impact on students, on science and on society.”

“Our school and its contributions to education and innovation will become part of Paul’s legacy, along with the many outstanding research institutes he has independently created,” said Hank Levy, Wissner-Slivka Chair in Computer Science & Engineering and director of the new school. “Every day, every one of us will work hard to make Paul as proud to be associated with us, as we are to be associated with him.”

The endowment comes in addition to UW CSE’s efforts to raise $110 million for a second computer science and engineering building across the street from the Paul G. Allen Center. UW CSE broke ground on that project in January. Allen’s latest gift comes in the midst of the University’s most ambitious philanthropic campaign in its history, “Be Boundless — For Washington, For the World.” The campaign seeks to raise $5 billion by 2020.

The web version of this release is posted here: http://www.bit.ly/AllenSchool 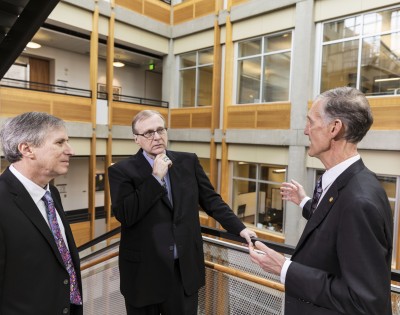 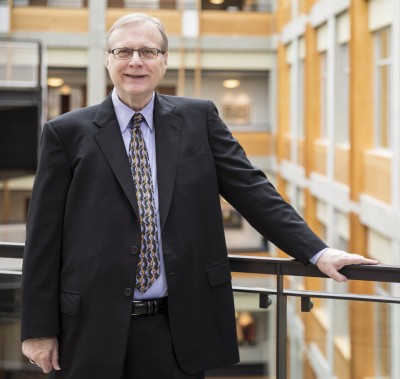 Caption: The University of Washington has established the Paul G. Allen School of Computer Science & Engineering, in recognition of Allen’s longstanding support of CSE and the UW.