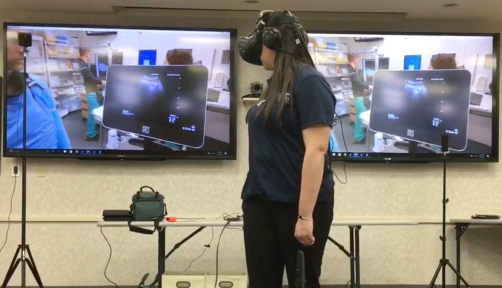 NAU doctor of physical therapy student Nicole Kuharske-Miller demonstrates the technology used in Petra Williams' immersive virtual reality project. She is wearing an HTC Vive VR headset and headphones. On the screens in the background you can see what she is watching.

Newswise — The young man had spent half of the last 24 hours unconscious after a traumatic brain injury sent him to the hospital. Once doctors determined he’d likely survive, the question turned to how severe the brain damage was. He could have forgotten the most basic human skills—walking, talking, movement—making seemingly simple tasks like going to the bathroom, going downstairs or even getting out of bed nearly impossible.

Upon waking, doctors and nurses in the ICU began assessing his cognition, his pain levels, his ability to respond to basic physical stimuli. They discussed letting him get out of bed, a necessary step to mark off but knowing a dozen factors from vertigo, dizziness, poor reflexes or muscle weakness could send the patient tumbling to the floor, risking further physical or brain injury.

Into this high-stress, high-stakes environment a physical therapist walks. The PT’s job sounds simple—assess the patient’s ability to move around, walk, turn right and left, shift his body weight, twist his spine, move his head—pushing the limits of his pain and ability without making his condition worse. The balancing act is different with every patient, and there is little room for mistakes or second-guessing.

It’s challenging enough for a seasoned clinician, but imagine dropping a PT student into this environment to learn from experience. Students, although prepared with simulated patients and situations in the classroom, often are overwhelmed by all that’s happening. The gap between classroom simulation and real clinical life means they typically need two to three weeks to just get used to the ICU environment and be ready to learn.

Petra Williams, a professor of physical therapy at Northern Arizona University, is part of a diverse group of academics and clinicians throughout the country aiming to prepare health care professionals for challenging clinical environments through the use of immersive virtual reality.

Williams and her husband, Eric, a professor of fine arts at Ohio University, are part of a grant to create and test 360-degree virtual experiences to train future health care providers.  However, instead of creating a computer-generated virtual environment, which is typically how virtual reality is presented, they create immersive experiences using 360-degree video cameras and audio equipment to capture actual patient care delivered by practicing health care professionals.

“Here, you’re right in the middle of things,” she said. “We’re really seeing how the health care providers act in that situation. Things usually don’t go perfectly. Simulations tend to be perfect, but these aren’t.”

They call it “preality,” or preparation for reality. It’s actual reality, but the student is only virtually there. Williams likened the experience to students peeking over the physical therapist’s shoulder and in the actual clinical environment in which they’ll be working.

The goal is to use these immersive preality experiences to fill the gap between classroom simulation and clinical practice.

“The thought is that, when students are actually in the ICU, the situation will be familiar and less scary, thus reducing the time they need to acclimate to be ready to learn,” Williams said. “It would give them a chance to watch and observe the actual clinic site without the pressure of having to be responsible for things or being in the way. They can ask what’s going on with this line, why is this person breathing that way. It gives them a chance to stare without being caught staring."

This project is a continuation on earlier forays into immersive virtual reality. The Williamses worked together in a trauma center to record patients and their doctors, using a 360-degree camera at eye level that captured all the activity in the emergency room—doctors yelling, computers beeping, patients bleeding and in pain as health care providers work on them.

The cameras are about fist-sized and are placed at eye level, so the user is in the action, not an observer from the side or above. The footage is not only real but it’s taken in places where students will be working, giving them the feeling of being right there. The trauma center is using the preality experiences as part of their resident orientation training program.

Preality experiences will not replace the simulations physical therapy students do in the classroom, but they will be an additional tool to help student prepare for difficult health care situations, Williams said.

They are the only group using virtual reality in this way that Williams knows of, and it’s getting noticed. Petra and Eric Williams presented at the Virtual Reality and Healthcare Symposium last week in Washington, D.C., and already were getting calls from throughout the country from programs interested in implementing 360-degree video VR into health care provider training.

In partnership with clinicians at Northern Arizona Healthcare, Williams plans to begin making recordings in the fall at Verde Valley as patients and clinicians give permission. The turnaround is quick enough that her students may be able to access these recordings this fall.