A Life-Saving Donation: Generous Caregiver Donates the Ultimate Gift – One of His Kidneys – to Colleague’s Husband 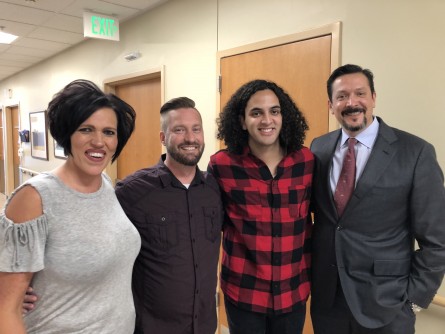 Newswise — The lives of two healthcare caregivers changed in two different, dramatic ways, thanks to a generous organ donation.

Kingslee Teo is a respiratory equipment assistant with Intermountain Healthcare Homecare in Ogden, Utah. Earlier this year he overheard his co-worker, Monica Anderson, mention that her husband, Jason, is living with end-stage kidney disease and on a kidney transplant waiting list that could take years.

Teo, who recently got married, went home and considered whether he could be the donor.  A few days later he approached Monica and suggested he be tested. Monica and Jason were amazed at his offer and generosity, and their amazement turned to joy when after months of testing Teo was found to be a perfect match.

“There is absolutely no other kind and selfless gesture as what Kingslee is doing for me,” said Jason. “I will never be able to repay him for what he has given me — a second chance at life.”

Sadly, 20 people die every day in America while waiting for a life-saving kidney transplant. According to the National Kidney Foundation, more than 3,500 people are removed from the kidney transplant waiting list each year because they become too sick to undergo a transplant surgery.

"Patients die on dialysis every day," said Manuel Rodriguez, MD, a surgeon with the Intermountain Medical Center Transplant Program in Salt Lake City, where the transplant surgery was performed. "Organ donation is where we see the best in humanity. It's the ultimate gift."

Jason had spent more than four years on the transplant waiting list while living with end-stage kidney failure. He continued to work a demanding and busy full-time job as a bank manager, then coming home and spending six hours a night doing the dialysis process. The family keeps a machine in their home office for at-home dialysis. A dextrose solution goes into Jason’s body, helping to clean it and do the work of his kidneys.

“It’s been hard not knowing how much time he has with us,” said Monica. “The dialysis therapy works extremely well for him, but things could have changed overnight.”

The transplant allows Jason to live a normal life again. As he recovers, he’ll be able to do things like travel on an airplane without the hassle of carrying medical equipment, not to mention have improved overall health and energy.

"It's been hard," Jason said. "I'm full of life and vivacious. I can't wait to get back to doing the things I love. Already I feel so much better."

“Organ donation really does allow people to have a second chance at life,” said Diane Alonso, MD, medical director of the abdominal transplant program at Intermountain Medical Center. “When a living donor, like Kingslee, steps up and offers a friend, colleague or sometimes even a complete stranger a life-saving organ, it truly is a gift of life.”

For Teo, the donor, he says that when the opportunity presented itself, he decided to take the chance to better someone else’s life.

“I hope that people will hear this story and have the urge to save someone’s life, too. I hope that kidney donations become more common as a result and that people see how much this can change a life,” he said.

Teo is taking off six weeks of work, as donating a kidney is major surgery. “I'm hoping for a speedy recovery for both myself and Jason,” he says.

Four days after the procedure, he was already feeling better.

The transplant took place at Intermountain Medical Center on Wednesday, Sept. 5, with Jason and Teo in adjacent operating rooms.

Currently, more than 114,250 people in the United States are on the national transplant waiting list. In Utah, 772 people are currently on the organ transplant list: 519 kidneys, 154 livers, 4 pancreas, 16 kidney/pancreas, 72 heart and seven lungs.