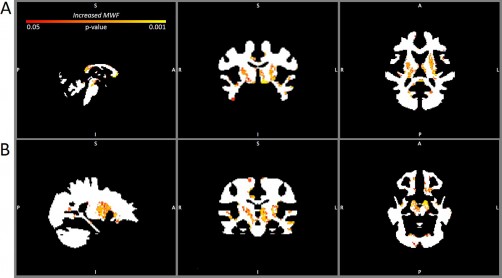 According to the Centers for Disease Control and Prevention, an estimated 1.7 million people in the United States sustain a traumatic brain injury (TBI) each year, and about 75% of these TBIs are mild TBIs, which include concussions.

Despite the gentle modifier, “mild” TBIs can cause disabling symptoms (headaches, dizziness, nausea, difficulties with concentration, and others), which in some cases do not resolve for weeks, months, or longer. In some contact-sport athletes, repeated mild TBIs have been linked to chronic traumatic encephalopathy (CTE), a serious neurodegenerative disease that develops later in life and is responsible for severe personality and neurocognitive changes.

What motivated the authors of the present study is the need for better diagnostic and prognostic tools for mild TBI, particularly in people who face greater risks of receiving one or more injuries, such as athletes engaged in contact sports. Thus far, conventional neuroimaging studies have been unable to reveal changes in the brain immediately following concussion and other mild TBIs.

Spader and colleagues tested a specific magnetic resonance imaging (MRI) technique—multicomponent driven equilibrium single pulse observation of T1 and T2 (mcDESPOT for short)—to see if they could find evidence of white matter changes in the brains of male college rugby and football players after mild TBI. White matter tracts (bundles of axons covered by myelin) are susceptible to primary injury from mechanical forces at the time of head injury and again to secondary injury from the swelling and chemical changes that naturally occur in the brain following head trauma.

The researchers assessed white matter changes by measuring the myelin water fraction (MWF)—the ratio of myelin-associated water to total water—in voxels on neuroimaging studies. Changes in the MWF represent changes in the amount of myelin, the white fatty substance that acts as a sheath covering the axons of neurons. The higher the MWF, the more myelin is present. When sufficient amounts of myelin are present and organized, the myelin sheath aids in the swift and accurate transmission of electrical impulses from the nerve cell body across the axon and on to other nerve cells, muscles, or glands. Damage, loss, or disorganization of myelin slows down or impedes this process.

Twenty-three male Brown University students participated in the study: 12 contact sport players (CSPs) who had sustained mild TBIs (one member of the rugby team and 11 football players) and 10 age-matched controls with no such injury (athletes from non–contact sport teams, specifically swimming, fencing, and cross-country).

Here are the pertinent findings:

These findings are depicted on MWF maps, essentially anatomical masks of white matter over which colored areas show an increased or a decreased MWF.

The increased MWF after mild TBI found in this study demonstrates an active remyelination process after mild TBI. However, as the researchers point out, increased myelin alone is not necessarily a good thing. Animal studies have shown that remyelination following mild TBI may result in disorganized and therefore less functional myelin.

The study is preliminary and no clear clinical ramifications of the MWF changes are apparent. The authors call for further studies in which a true baseline MWF can be determined in CSPs before injury occurs rather than relying on a surrogate baseline MWF from non–contact sport players. The researchers also point out the need for a larger study population. Nevertheless, they note: “this study provides a basis for additional studies aimed at understanding the underlying neuropathophysiology of the brain’s recovery from [mild] TBI.”

When asked about the study, Dr. Spader replied, “We were surprised by the finding of increased myelin in the contact sports players compared with non-contact sports players at baseline and 3 months after injury. Using the mcDESPOT sequence, we can see that there is a remyelination process after an injury. The next question, however, is to determine if the increased myelin leads to the formation of a type of scar tissue that can cause disorganized signaling in the brain and which can eventually lead to an increased susceptibility to neurodegenerative disorders such as dementia.”

Founded in 1931 as the Harvey Cushing Society, the American Association of Neurological Surgeons (AANS) is a scientific and educational association with more than 10,000 members worldwide. The AANS is dedicated to advancing the specialty of neurological surgery in order to provide the highest quality of neurosurgical care to the public. All active members of the AANS are certified by the American Board of Neurological Surgery, the Royal College of Physicians and Surgeons (Neurosurgery) of Canada or the Mexican Council of Neurological Surgery, AC. Neurological surgery is the medical specialty concerned with the prevention, diagnosis, treatment and rehabilitation of disorders that affect the entire nervous system including the brain, spinal column, spinal cord, and peripheral nerves. For more information, visit www.AANS.org.