Aerobrick: A Brick with a World Record 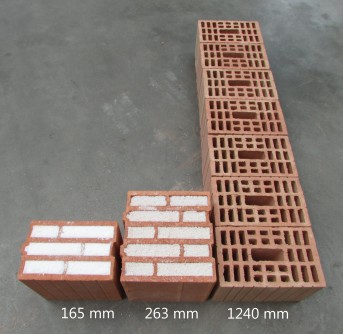 In order to achieve the same insulation values as a 165 mm thick wall of aerobricks, a wall of perlite bricks must be 263 mm thick - and a wall of non-insulating bricks even more than one meter!

Newswise — The calculation is simple: the better a building is insulated, the less heat is lost in winter - and the less energy is needed to achieve a comfortable room temperature. No wonder, then, that the Swiss Federal Office of Energy (SFOE) regularly raises the requirements for building insulation.

Traditionally, the insulating layers are applied to the finished walls. Increasingly, however, self-insulating bricks are being used - saving both work steps and costs and opening up new architectural possibilities. Insulating bricks offer a workable compromise between mechanical and thermal properties and are also suited for multi-storey buildings. They are already available on the market in numerous models: some have multiple air-filled chambers, others have larger cavities filled with insulating materials such as pearlite, mineral wool or polystyrene. Their thermal conductivity values differ depending on the structure and filling material. In order to reach the insulation values of walls with seperate insulating layers, the insulating bricks are usually considerably thicker than normal bricks.

Aerogel instead of Perlite

Empa researchers have now replaced Perlite in insulating bricks with Aerogel: a highly porous solid with very high thermal insulation properties that can withstand temperatures of up to 300°C (see box). It is not an novel material for the researchers: they have already used it to develop a high-performance insulating plaster which, among other things, allows historical buildings to be renovated energetically without affecting their appearance. (Link to article)

Together with his colleagues, Empa researcher Jannis Wernery from the research department "Building Energy Materials and Components" has developed a paste-like mixture of aerogel particles to be used as filler material for the brick. "The material can easily be filled into the cavities and then joins with the clay of the bricks," says Wernery. "The aerogel stays in the bricks - you can work with them as usual." The "Aerobrick" was born.

A comparison in a special measuring device for thermal conductivity at an average temperature of 10°C shows that the perlite-filled bricks with the same structure and thickness insulate by about a third less than the aerobrick. In other words, in order to achieve the required insulation values, a wall of perlite brick must be about 35% thicker than an aerobrick wall.

Even more impressive is the comparison with ordinary brickwork made of non-insulating bricks: These conduct heat up to eight times better. A conventional wall would therefore have to be almost two metres deep in order to insulate as well as an aerobricks wall of just 20 centimetres in depth. With a measured thermal conductivity of just 59 milliwatts per square meter and Kelvin temperature difference, the Aerobrick is currently the best insulating brick in the world.

But now and in the very near future, no one will probably be able to build a new house from aerobricks - the filling material is currently still too expensive. Wernery calculates that at today's market price for aerogel, a single square metre of a brick wall would generate additional costs of around 500 francs. However, experts assume that the costs for Aerogel will fall massively in the near to medium term - then nothing will stand in the way of the use of the new wonder brick.

Aerogels are a relatively new development as insulating materials in the building sector. The base for the material are mostly silicates, but in volume it consists of more than 90% of air-filled pores with sizes in the nano range. This minimizes the energy transfer through the movement of the air molecules - in other words, aerogels are highly efficient insulating materials. In addition to its thermal properties, aerogels are vapour permeable, absorb almost no moisture, recyclable, non-toxic and non-combustible. This makes it an almost ideal thermal insulation material for buildings.