The American Institute of Physics (AIP) announced today that its Board of Directors has selected information systems expert John Regazzi, Ph.D., as its new chair. 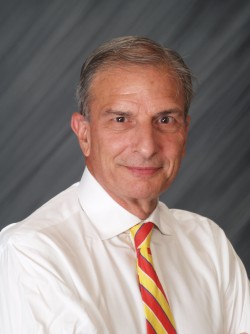 John Regazzi, announced today as the new chair of AIP's Board of Directors

Newswise — WASHINGTON, D.C., July 7, 2017 -- The American Institute of Physics (AIP) announced today that its Board of Directors has selected information systems expert John Regazzi, Ph.D., as its new chair. He begins his appointment September 10, 2017 and will preside at the board meeting in November.

Regazzi is presently managing director of Akoya Capital, a private equity company, where he also leads their Professional Information Services practice. He retired last year from the faculty of Long Island University. Prior to that he was CEO of Elsevier, Inc., the largest scientific, technical and medical publisher in the world.

In his new role, Regazzi will be responsible for providing leadership to AIP's Board of Directors and will lead their efforts to oversee governance, policy and corporate strategy for the institute, a mission-driven nonprofit organization based in College Park, Maryland, which is devoted to advancing, promoting and serving the physical sciences for the benefit of humanity. (See www.aip.org.)

"Governance at AIP requires leading two boards and working with two executive leadership teams in parallel," said outgoing AIP board chair Dave Surman, Ph.D. "John's sense of strategy, honed over decades of leadership in the publishing industry, makes him the perfect leader to run our boards as we chart our course in the coming years," Surman added.

Regazzi's academic and professional background is in information systems -- the computer science discipline devoted to the study of how data flows within and between networks and the design of hardware and software tools that allow people and organizations to access it.

“AIP represents the pre-eminent scientific societies in the physical sciences around the world today, and I am delighted and privileged to serve as chair of such an important and vital organization," Regazzi said. "The board has defined a far-reaching mission for AIP and we will strive to continue to build viable programs that align with our member societies and add significant value to the field and to the scientists and students we serve.”

Born in Brooklyn, New York, John Regazzi attended St. John’s University, graduating with a B.S. degree in experimental psychology in 1970. He subsequently received an M.A. from the University of Iowa, an M.S. from Columbia University and a Ph.D. in information science from Rutgers University, where he was awarded an Outstanding Doctoral Dissertation prize from the American Society for Information Science for his work on the evaluation of information systems performance in 1984.

An expert in information sciences and service, Regazzi has a distinguished career that includes several industry breakthroughs. He was the driving force behind the first commercially available CD-ROM text database, for instance, and he established the first professional web community for engineers. He was a keynote speaker at the first Microsoft CD-ROM conference in 1986.

His decades of work in the publishing industry was a career that happened almost by chance. In 1981, he was a newly minted associate professor at Rutgers University's School of Library and Information Studies when he took a leave of absence to help an old friend set up automation systems for H.W. Wilson Company, a New York-based publisher of indexing services, monographs and library reference materials. He stayed, becoming vice president.

In 1988 Regazzi moved on to become CEO of Engineering Information Inc., a company founded in 1884 that was dedicated to providing technical information directly to engineering professionals and technical libraries. A decade later, Regazzi was responsible for its sale to Reed Elsevier.

After this purchase, Regazzi was named CEO of Elsevier, where he was responsible for launching and marketing groundbreaking net-based services for the professional scientific, technical and medical communities, including ScienceDirect, Scirus, Scopus, Engineering Village and Medical Consult. He stepped down as CEO in 2005, continuing as chairman of the Elsevier Foundation until his retirement from the company in 2010.

Also in 2005, Regazzi became dean of the College of Information and Computer Science of Long Island University (LIU), serving in that role until this college was merged with another at LIU in 2008 and then continuing on as professor and director of the Scholarly Communications and Information Innovation Lab until his retirement in August 2016. During his time at LIU he had visiting faculty appointments at the University of Stuttgart in Germany and Universidad Politecnica de Valencia in Spain.

In addition to his appointment as chair of the AIP Board of Directors, Regazzi serves on the boards of several nonprofit, for-profit and governmental organizations, including for the last several years on the AIP Publishing Board of Managers.