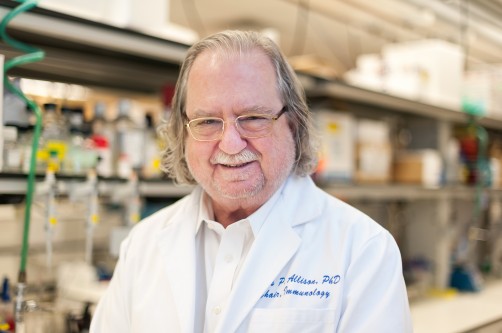 Newswise — The Association of American Cancer Institutes (AACI) will present the AACI Distinguished Scientist Award to James P. Allison, PhD, on October 24, during the 2016 AACI/CCAF Annual Meeting, in Chicago. Prior to the award presentation, Dr. Allison will deliver a talk entitled, “Immune Checkpoint Blockade in Cancer Therapy: New Insights, Opportunities and Prospects for a Cure”.

Dr. Allison is Professor of Immunology, Chair of the Department of Immunology, and Executive Director of the Immunotherapy Platform at the University of Texas MD Anderson Cancer Center.

His fundamental discoveries include the definition of the structure of the T cell antigen receptor, demonstration that the T cell molecule CD28 provides costimulatory signals necessary for full T cells activation, and identification of the inhibitory checkpoint molecule CTLA-4, which inhibits activated T cells. He proposed that immune checkpoint blockade might be a powerful strategy for therapy of many cancer types, and conducted preclinical experiments showing its potential.

Dr. Allison was involved in the development of Ipilimumab, which was approved by the FDA for treatment of metastatic melanoma in 2011. In 2014, the FDA approved two antibodies to PD-1, a related immune checkpoint, for the treatment of melanoma. In 2015 the FDA approved five additional CTLA-4 and PD-1 antibodies and combinations of both for the treatment of a variety of additional indications, including melanoma, lung, and kidney cancer. The development of immune checkpoint blockade transformed cancer therapy and has been responsible for saving the lives of thousands of cancer patients.

Dr. Allison obtained his BS and PhD from The University of Texas at Austin. After a postdoctoral fellowship at Scripps Clinic and Research Foundation he joined the faculty of The University of Texas MD Anderson Cancer Center Science Park in Smithville, Texas, in 1974 as Assistant Biochemist. He moved to the University of California, Berkeley in 1984 as Professor of Immunology. At Berkeley he served as Director of the Cancer Research Laboratory, Head of the Division of Immunology in the Department of Molecular and Cell Biology, and Co-chair of the Department of Molecular and Cell Biology. In 2004 he moved to the Memorial Sloan Kettering Cancer Center in New York City, where he was Professor of Immunology, Chair of Immunology and Director of the Ludwig Center for Cancer Immunotherapy. He joined MD Anderson Cancer Center in 2012.

AACI and the Cancer Center Administrators Forum (CCAF) jointly formulated the program for the 2016 AACI/CCAF Annual Meeting. More information about the meeting, including the program and electronic registration, is available on the AACI website.
###

The Association of American Cancer Institutes (AACI) comprises 95 premier academic and freestanding cancer research centers in the U.S. and Canada. AACI is dedicated to reducing the burden of cancer by enhancing the impact of the leading academic cancer centers.
The Cancer Center Administrators Forum (CCAF) provides a network for administrative professionals to exchange knowledge, expertise and share best administrative practices in National Cancer Institute-designated cancer centers.